In an emotionally charged conclusion to the Nov. 17 village board meeting, Trustee Dennis Walsh resigned as trustee to prepare for his new role as a Town of North Hempstead Town Councilmember.  Walsh has served on the village board since 2013. Councilman-elect Walsh was overwhelmingly elected to the Town Council on Nov. 2 and will be sworn in as Councilman representing residents of Mineola, Williston Park, and New Hyde Park in January.

Mayor Scott Strauss and the village board individually expressed their best wishes for Councilman-elect Walsh, and shared their fond recollections of working alongside him on the village board. Among the common themes echoed by the board were Walsh’s commitment to serving residents, his mastery of details when deliberating village issues, and the genuine friendships he fostered with both board members and the residents he served. 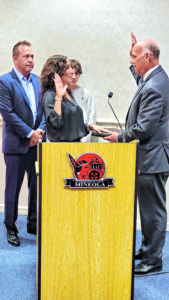 Mayor Strauss announced that, after long contemplation and consideration of several qualified candidates, he was appointing Janine Sartori to fill the unexpired term created by Walsh’s departure. The appointed trustee will serve until the next village election in March 2022 when Walsh’s term was due to expire.

Mayor Strauss noted that Sartori is a marketing and financial expert with her own financial company advising some of the top corporations, has a long history of civic involvement in Mineola, in particular within the Mineola Schools PTA, Mineola Athletic Association, and other parent groups, and has been serving on the Village Board of Zoning Appeals for the past several years. Mayor Strauss noted that Sartori has a vision for the village, and will be a tremendous asset to village government.

Mayor Strauss administered the oath of office to Sartori, surrounded by her family, and invited her to be seated on the board for the remainder of the meeting.

—Submitted by the Village of Mineola