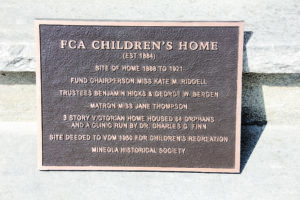 It was the first Mineola Historical Society marker to be placed in the village—with more to come in the coming years—members of the village, the historical society and Family & Children’s Association (FCA) came together last week to hold a dedication ceremony.

On a cold damp day in late October, a small group of people watched the marker honoring the FCA Children’s Home be installed on the brick chimney wall of the Little League snack bar building on Willis Avenue at the Mineola Athletic Association Baseball fields.

“This is the first Mineola Historical marker to be put in place,” Vice President of the Mineola Historical Society Peter Burnside said. “The dedication is for the first of its kind Children’s Home on Long Island and was a big improvement over the previously state-run facilities, which were a little better than work houses. When we think of the place that Oliver Twist or Orphan Annie lived in, we can see that a privately run facility with strong supervision by caring benefactors was a big improvement for the children. Nationally we have to thank the likes of Louisa Lee Schyler—the great granddaughter of Alexander Hamilton—and other notable ladies at the time who badgered Congress to allow private institutions to build and operate compassionate homes for unwanted children. The grounds were open to neighborhood children to play, exercise and mingle with the residents of the home.”

Burnside added that The Children’s Home in Mineola was an ideal place for these orphans and abandoned children. In the mid 1800s, Hempstead resident Kate Riddell secured the plot of land and supervised the day-to-day operations of the facilities. Doctor Charles Finn ran a clinic to attend to the welfare of the children on the property. Former trustees Benjamin Hicks and George W. Bergen were local gentry who were also heavily involved with the day-to-day activities.

The location of The Children’s Home was the original location of where FCA once stood where the three-story Victorian home housed 64 orphans. This land was given to the Village of Mineola in 1950 under the circumstance that the premises should only be used for the establishment of a children’s park, playground, recreational center, and places for housing of children’s organizations such as Boy Scouts, Girl Scouts, Police Boys clubs. The FCA celebrated is 135th anniversary two years ago in 2019. FCA is a nonprofit agency helping more than 30,000 Long Islanders each year and has worked to protect and strengthen vulnerable children, seniors, families and communities on the Island. FCA is currently located in its new headquarters at 377 Oak St. in Garden City.

“Former president of the Mineola Historical Society Neil Young had a vision of a historical marker trail in Mineola, but passed away before he could see his dream fulfilled, so we have picked up the torch and plan to continue with the mission,” Burnside added. “We have about 12 more on the list and some of them such as, the ‘Opera House’, ‘Mineola Theater,’ ‘Nassau Hospital’ and ‘St. Paul’s Chapel’ are already in the works. Others include the ‘Old Library’ and ‘Long Island Motor Parkway’ (aka Vanderbilt”s Motorway) are in the not-too-distant future. It takes time and money to do this and each bronze marker costs almost $400. We are always happy to receive donations to the cause.”

Deputy Mayor Paul Pereira, who was in attendance at the dedication ceremony, praised the historical society and FCA’s efforts in promoting local history and noted how the donation of land in 1950 from the board of the Children’s Home to the village has impacted multiple generations of children in the community.

If you would like to help the historical society, donations can be made out to Mineola Historical Society, and be mailed to P.O. Box 423, Mineola NY 11501.

“The dedication ceremony went well,” Burnside said. “Unfortunately, we had hoped to advertise this at the street fair, but that was a washout, so not many people from the local community showed up.”