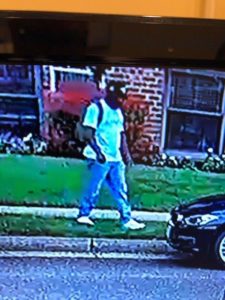 The Third Squad is investigating a Burglary that occurred on Sept. 1 at 10:58 a.m. in Mineola.

According to detectives, a 47-year-old female victim returned to her apartment on Horton Highway to find it ransacked with multiple items missing. An unknown male subject, described as a male black, approximately 30 years old with a heavy build, was seen entering the lobby and proceeded towards the victim’s apartment. He was wearing a black hat, white t-shirt, blue jeans and white sneakers. He was carrying a black backpack. He was seen fleeing the scene on foot from the North side of the building in an unknown direction.

Detectives request anyone with information regarding the above burglary contact Nassau County Crime Stoppers at 1-800-244 TIPS or call 911. All callers will remain anonymous.