Another popular restaurant in the Village of Mineola suffered a sad fate last week when it went up in flames suffering extensive damage throughout the building.

According to the Nassau County Police Department, the fire occurred at 12:40 p.m. at Piccola Bussola located at 159 Jericho Tpke. on Aug. 27. Upon arrival, police units found the restaurant and the apartment above were fully engulfed in flames. Multiple fire departments responded to extinguish the fire, which could be seen for miles, over a two-hour period. Three members of the fire department suffered injuries and were treated at the scene. Some residents even reported losing power right after the fire started.

“Early indications are no one was in the restaurant when it ignited,” a restaurant spokesperson said when Anton Media Group reached out for comment. “The cause and exact origin of the blaze weren’t immediately clear.” 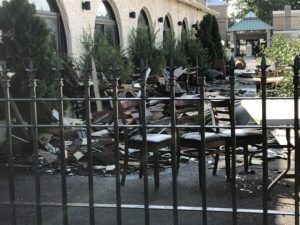 The Nassau County Police Department said that the fire is still under investigation.

To help the families, visit www.gofundme.com/f/mineola-fire.

Piccola Bussola, which is owned by former Mineola Chamber of Commerce president Tony Lubrano, posted on its Facebook page that the restaurant will rebuild and be back as soon as possible.