From coast to coast and from city to city, protests have erupted this past week over George Floyd, an African-American man who was murdered by officers of the Minneapolis Police Department in Minnesota. All four police officers involved in the murder of Floyd have been arrested and charged, but protesters are still demanding justice and for criminal justice reform for the African-American community. 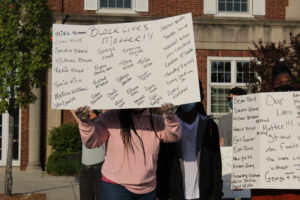 Last week, approximately 2,000 protesters—amid a worldwide pandemic—descended to the Theodore Roosevelt Executive and Legislative Building in Mineola to peacefully protest with their signs held high calling for unity and justice. With a heavy police presence on the ground and in the air to make sure the protest stayed peaceful, protesters of all ages, races and religions came together to listen to local leaders who gave speeches on the front steps of the legislative building.

At the beginning of the protest, Reverend Arthur Mackey from the Mount Sinai Baptist Church in Roosevelt said that there are two viruses that have hit America.

Another speaker at the protest was Bobbie Powell, who is a member of the Hempstead NAACP branch.

“We watched a man get lynched in 2020,” Powell said. “We can’t have this anymore. It is not a crime to be dark skinned. The officers who stood by and watched this man take his last breath need to be held accountable.” 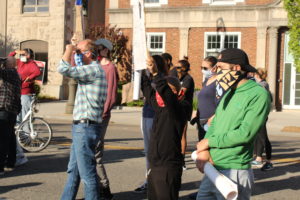 In a statement, Nassau County Executive Laura Curran said she is proud of how residents and law enforcement are responding amongst the protests and how they’re dealing with the group of people who are inciting riots by looting and destroying businesses around the state.

“Nassau will continue to safeguard our residents’ right to make their voices heard,” Curran said. “I want to also praise the men and women of our police department for their extraordinary professionalism. The county will continue to take every precaution necessary to keep everyone safe as well as protect businesses.”

Things took a slight turn this past weekend when Nassau County Police arrested 11 protesters (10 adults for disorderly conduct as well as one juvenile). For the demonstrator’s safety, police repeatedly made attempts to keep protesters off the Meadowbrook Parkway. This safety precaution was met with strong opposition and resistance, which resulted in the arrests. Additionally, two police officers were injured.

“Our police officers take an oath to protect and serve and they have done that admirably,” Curran and NCPD Police Commissioner Patrick Ryder said in a joint statement. “We have and continue to protect the public, which includes protesters, during marches, on major roadways and during their interaction with counter protesters. We continue to support the rights of individuals who exercise their freedom of speech according to the First Amendment; however, these demonstrations must remain safe and orderly. We would like to thank the public for their patience and cooperation during these troubling times.”