From the time Megan Kleven was young, she always wanted to start a business. So at age 22, she took a leap of faith and the Mineola-based restaurant Mama Soup was eventually born.

“In 2008 right when the recession began and everyone was losing their jobs. I decided to quit my office job with an energy efficiency company based in Manhattan and opened a business,” Kleven said. “I had many ideas, but the idea for Mama Soup was the most ‘recession proof’ of them all. It would be reasonably priced and have comfort food that people might turn to when they were suffering from the stresses of the recession. I researched the restaurant business and formed the concept of Mama Soup for a year before making it a reality. Owning a business didn’t run in my family and I wasn’t a chef, but I had a business mind, the will and drive, and tremendous support from my family and friends. Starting a business takes work, but starting a business with not two pennies to rub together is nearly impossible, but I did it. I had lots of ups and downs, but I kept going. I opened the second location in Mineola in 2012 and here we are today. The first location in College Point closed in 2015 after the building was sold.”

Now Mama Soup is helping to pay it forward by donating food to frontline workers at local hospitals.

“Winthrop is our neighbor and it was an easy decision to show support to our very local heroes who are risking everything to save lives,” Kleven said. “Spreading the Mama Soup love, with Mama Soup’s SOUPER Relief Team is an effort to put a smile on faces, come together to do good, uplift the community and show our extraordinary appreciation to the frontline heroes. We have donated more than 1,000 meals in the past [few] weeks to frontline heroes including FDNY EMS Station 50, Nassau County Police Department, NYPD, Saint Joseph Hospital, North Shore and LIJ Hospital, all departments within Winthrop Hospital and many satellite locations among others.”

“During a time that is extremely fragile for an infant business, a natural disaster that crippled New York for weeks could very well have been the end for Mama Soup,” Kleven explained. “We were hit hard, but some people lost everything. My uncle’s house burnt to the ground in Breezy Point and that is one example of so many. So I quickly decided to form Mama Soup’s SOUPER Hurricane Relief Team. We cooked batches of soup, collected donations of supplies from the community, rented a box truck and our employees went to the Rockaways to setup a makeshift food stand on the sidewalk. We gave away gallons of free soup pint-by-pint to those people who were hit the hardest. The Mama Soup team, which I like to call family really came together. We became stronger because of it.”

Once the pandemic struck, Mama Soup lost 99 percent of its sales overnight since it is located in a predominantly commercial area.

“Most of our customers were the businesses that surrounded us, which were lawyers, doctors and offices. When the state shutdown, overnight our sales hit the floor. This wasn’t the first time our team faced hard times. It was a hard decision as a small business owner and leader with the health risks of staying open versus the reward of keeping our team working and employed. Collectively the employees expressed their desire to continue working. And so we did what we know how to do best. We revitalized the SOUPER Relief Team efforts and started a GoFundMe page to collect donations. And for the past couple of months, we have been delivering food donations to frontline workers all over Nassau and Queens. Through these efforts, we are not only paying it forward, but keeping our team working.” 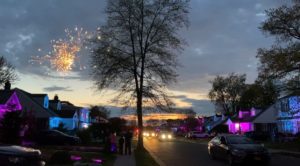 A recent light show that was put together in Franklin Square, where Kleven resides, also helped produce funds for food donations.

“My neighbor Mike Mollish owns a DJ company,” she said. “He put together a smaller scale light show a few weeks ago on our block to raise funds and donate food to local frontline workers through various local restaurants. It was so successful and uplifting, that he wanted to do it again by lighting up the entire block, this time synchronized with music. We partnered in order to maximize the number of frontline workers we could feed with the funds raised, by sending the meals from Mama Soup. We promoted the event together and had a huge turnout. We raised funds to donate more than 500 meals to the frontline workers.”

However, the future of the small business, like most, is in limbo.

“As a small business, even with all of the additional efforts we are making, we are still only treading water and at risk of losing everything,” Kleven said. “It means everything to us to keep the doors of Mama Soup open and continue to serve the community. All small businesses need the community’s support. We ask everyone to come together, continue to pay it forward and to donate to the SOUPER Relief Team efforts. We are proud to be making a big difference.”