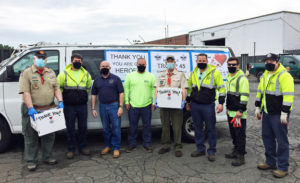 The COVID-19 pandemic continues to affect our global village in a variety of ways. Here in Mineola, the highly motivated and dedicated teens of Boy Scout Troop 45 received their big disappointment when they recently learned that–for the first time in nearly a century–they cannot go to summer camp this year because of coronavirus social distancing rules.

Instead of thinking about what could have been, the youth-led group – which is one of the largest and most well-known boy scout troops in the country–immediately did what they do best: They developed, approved and implemented an immediate action plan to use the summer camp money they earned and saved all year long–through pancake breakfasts, holiday wreath sales and other community fundraising events – to honor our local front-line heroes. 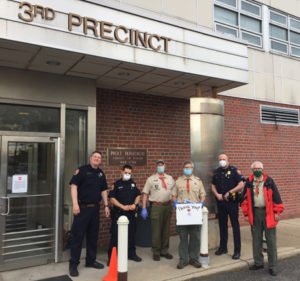 According to Scoutmaster Steve Grosskopf, throughout the current pandemic, Troop 45 has continued to function via regular group-wide video conference troop and committee meetings, weekly online training sessions and even electronic patrol chat meetings. But the singular major event that everyone looks forward to, the highlight of our scout year, is our sleep-away camp.

“When we recently learned that this year’s long-term outdoor experience has to be cancelled, there naturally was a troop-wide moment of astonishment, followed by brief silence and frowning over the news,” Grosskopf said. “Then, as our boys do each and every time in the face of challenge, they unhesitatingly rose to the occasion and decided to do something special by using their summer camp savings to honor our local hometown Front-Line Heroes. While our other adult leaders and I weren’t totally surprised by the scouts’ courageous and generous decision to place the needs of others above their own, it did make us pause and reaffirm our own beliefs about how, time after time, they make us extremely honored and proud to be their mentors.”

The troop purchased a truckload of special treats and goodies, which they packaged into many boxes and containers and included cards with heartfelt messages, photographs and notes from the scouts to their Front-Line Heroes. As a key topic of their most recent troop-wide video-conference meet, the scouts asked their adult leaders–in the interests of COVID-19 concerns–to gather a small group of trained volunteers, wearing personal protective equipment (PPE) and observing all public health guidelines, to make the deliveries on their behalf. To this end, Scoutmaster Grosskopf was joined at each of the stops by long-time Assistant Scoutmasters Bob Ammann, Don Franz and Harvey Krimko.

The event was also attended by New York’s major news media, which commended troop members for their selfless commitment to “Doing a good deed daily.”

Among the many recipients of Troop 45’s front-line heroes kindness is NYU Winthrop Hospital Gastroenterology Fellow Dr. Anthony Razzano, himself an Eagle Scout, who said he and his medical colleagues were deeply touched by Troop 45’s kindness.

“When Camille [NYU-Langone’s Camille Lopes] notified the hospital staff that there were special boxed treats for everyone in the hospital lobby, it was a highlight of our day to see what Troop 45, which is considered among the best of the best in scouting, did for us. They exemplify the true spirit and ideals of scouting.”

Troop 45 is sponsored by the First Presbyterian Church of Mineola and is one of the largest, oldest and best-known troops in the U.S. During the coming 2021 year, it will celebrate its Centennial 100th anniversary of boy scouting in Mineola, culminating in a huge Nov. 27 gala at Jericho Terrace. The troop traces its earliest roots back to Teddy Roosevelt, who was a driving force in establishing the Boy Scouts of America and one of Nassau County’s most notable scouting leaders. 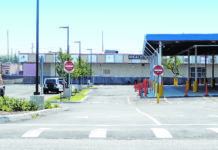 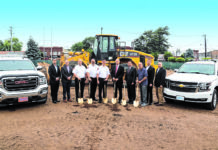