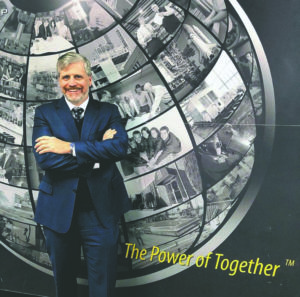 Mineola resident John Wilson, Jr. grew up in Mineola, went to Mineola High School and also happens to be the CEO of the New Jersey based-company VMC Group. Like many people who have hobbies, Wilson’s is most likely different than most.

“My favorite part about Mineola is the close-knit community that surrounds the area,” Wilson said about the village. “I graduated from Mineola High School in 1986. I decided that this was where I wanted to live with my future wife and children one day. Years later, my wife and I moved into our current house and have resided here for the past 21 years. Still, to this day, we love our neighbors and the neighborhood surrounding them. In addition to the community, I love the proximity and closeness to New York City, beaches, shopping, airports, etc. Mineola is a prime location.”

Wilson is the chairman and CEO of VMC Group, which is recognized as a world leader in the design, engineering and manufacture of vibration isolation, seismic control and shock protection products. VMC Group offers products that cover a wide variety of industries such as commercial construction, industrial/vehicular, OEM, and military/aerospace.

“In short, the products that we design and develop are proven to meet and exceed specifications for any seismic, wind, non-seismic, shock, or even bomb blast application,” Wilson said.

So how did this CEO become interested in mountain climbing?

“When I was younger, I used to climb all the trees in the Mineola neighborhoods and even some buildings,” Wilson recalled. “As I grew into a teenager, I started to get into a bit of trouble because I started to climb taller trees and buildings on other people’s property. When I turned 15, my parents didn’t want me staying home during that summer because they feared that I would continue to get into trouble. That summer, they sent me away to a hiking and mountain climbing program in the Canadian Rockies for eight weeks. During this time, I developed a passion and urge to climb mountains. As I grew into my 20s, I became busy with family, starting a business and didn’t have as much time or resources to continue doing what I grew to love. On my 50th birthday, my wife gave me a surprise trip to the Himalayas. She was aware that my desire for the mountains never diminished, just that life took over. The trip reignited my passion and sense of urgency to achieve my dreams.”

Over the past year, Wilson reached the summit of Mount Rainier and the Himalayas, which he said was difficult to do as one can imagine.

“Each trip, at the time, was the hardest thing that I had ever done,” he said. “It’s physical, spiritual and mental to achieve any climb of any mountain, for me. The preparation for each mountain starts six months before. The final three months before the climb develops into very high-intensity training to achieve peak physical condition. At the same time, I maintain a strict diet to ensure that I am receiving the proper nutrients to remain in top health.”

Wilson said that when he climbs the mountains he truly lives in the moment and feels a sense of freedom.

“In today’s world, during these trips is the only time that I am living in the moment,” Wilson said. “It is freeing to be disconnected from technology. Even though it may be the most physically demanding activity that I ever do, I end up having an extraordinary feeling of mental rest during [the climb] and especially when I reach the top. My mind becomes less cluttered allowing me to feel exhilarated and at a sense of peace once I reach the top.”

This past month, Wilson traveled to Argentina to reach the summit of Aconcagua, which is a staggering 22,841 feet.

“Like any other mountain, we follow a guided process one step at a time,” he said. “The journey was one step at a time where I was able to only focus on what I was doing at that exact moment throughout the entire climb. Although I reached the summit of Aconcagua, the accomplishment still seems surreal to me.”

Immediately upon Wilson’s return from Aconcagua, he has continued to train to upkeep a base fitness level since now he plans to climb the other six world summits.

“I continue to maintain a healthy based diet,” Wilson said. “I have also signed up to do an additional yet more technical climb of Mount Rainer this summer to help me prepare me for one of the next six summits. My family is very supportive but of course, they have concerns. They miss me dearly and worry about my safety especially because I have minimal access to phone service during these periods. However, they always encourage me to continue following my dreams.”