Chaminade High School junior and West Hempstead native Darian Parks is currently in his second year on the high school’s varsity basketball team and at 6’10,” Parks is a fierce opponent on the court. Recently, Parks answered some questions from the Mineola American including his most memorable game, his pregame ritual and his college plans.

Q: Is there one basketball game that has been the most memorable so far this season or last?

A: There are a few games that stick out, but the one from this year that really stands out the most is the one we lost against LuHi. That game was a huge test for us. They are really good this year, and it was a game that we knew had a chance to win. It was an important lesson for the team. We knew from then on that we can compete with anyone if we play our game and play with the same energy and drive.

Q: This is your second year on the varsity basketball team. What is different from your first year compared to this year?

A: The biggest change is my role on the team in general. Joining the varsity as a sophomore and coming off of a broken foot my freshman year, I was expected to learn from the veteran varsity players and adjust to the speed of a varsity game. Guys like Liam Drennan really took me under their wing and helped get me ready for this year. Now, as a second year varsity player, I have a leadership role. I am expected to play more minutes, to produce and to be a leader for the team. There’s less room for error now. 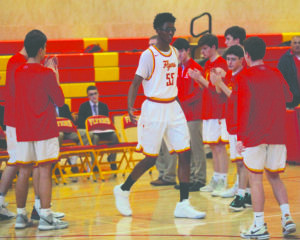 Q: What are some of your pregame rituals, if any?

A: I’m not very superstitious. Before a game, I listen to music. It gets me revved up and helps me clear my head and focus on the game. I have pretty eclectic taste in music, so I try to change up who I listen to.

Q: What attracted you to basketball in the first place?

A: Basketball was all around me growing up. Most of my family played basketball. My Dad got me into it when I was in elementary school, and a lot of other members of my family played, as well. I have a cousin, Bobby Ray Parks, who plays professionally overseas.

Q: Do you have any plans to play basketball once you get to college? What are your college plans?

A: I would like to play in college and even beyond if I have the opportunity. I’m only a junior, so I have some time. Academics are important to me, though, and I don’t want to sacrifice academics for basketball. If I play in college, I’d like to play at a high academic school.

Q: What is the best advice you’ve ever received in terms of basketball?

A: My coaches always preach moving on from mistakes. I try to apply this to everything now. Stepping into my second year on the varsity, I sometimes let my role on the team get ahead of me at times. I have to be strong enough to move past a mentality that I can’t make mistakes. I try to not let mistakes get in my head and influence how I approach the rest of a game, a class or anything else I am doing.