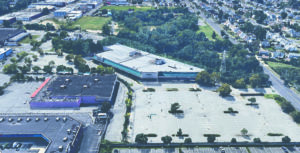 An Amazon spokesperson declined to make it official, but several people who have been in discussion with the online retail giant said it will be opening a distribution site in nearby Carle Place, perhaps in September.

In an email to the Mineola American, a spokesperson stated, “We are constantly exploring new locations and weighing a variety of factors when deciding where to develop sites to best serve customers. However, we don’t provide information on our future road map.”

Town of North Hempstead Councilwoman Viviana Russell, who represents the hamlet, said that the town was contacted by Amazon several months ago.

“They asked us to respect their confidentiality until they decided whether or not they were going to move forward,” she said. “They didn’t say how they came to choose this location, but they did say they had been looking for one—and this location fit their needs. I suggested to them that if they decided to move forward, that before they even submitted an application to the town, they should meet with the community leaders as well as the public.”

“I also suggested that they have a meeting with the community at large,” Russell said. “I did offer them our facility at Fuschillo Park [in Carle Place] as a meeting location. They haven’t decided whether or not they’re going to do that. I also introduced [Amazon representatives] to Village of Mineola Mayor [Scott] Strauss, because as you know, the property sits on the border of Carle Place and Mineola.”

In a statement to the Mineola American, Strauss said Amazon’s preliminary plans indicate that the impact on nearby Mineola residents should be no greater than when the site operated as a supermarket.

“Amazon is a respected company used by many Mineola residents,” Strauss said. “Amazon recently reached out to us to share their plans to occupy the old Waldbaum’s building on Westbury Avenue in Carle Place. Since the Town of North Hempstead has exclusive jurisdiction over Carle Place sites, we appreciate Amazon inviting us to weigh in on their proposal. Their reaching out to us to openly share their plans is an indication they wish to be a good neighbor. We will continue to carefully watch and be as much a part of the discussion of this project as possible keeping the concerns of our residents, especially those in the immediate area, in mind.”

According to Russell, Amazon met with the leadership of the CPCA and the Seniors on Jan. 14 and 15 respectively.

At the monthly CPCA meeting on Jan. 15, board members updated the attendees on the discussion.

“It’s going to be a final distribution center,” President Ursula Babino said. “Amazon sends packages to this facility and anyone who lives within a 45-minute radius will [have the packages] delivered through this center.”

The company, board members revealed, had signed a 15-year lease.There will be no 18-wheelers going down Westbury Avenue, but instead they will have to go through Voice Road from Glen Cove Road. The entrance on Westbury Avenue will not be big enough to accept the delivery trucks.

Babino said they were informed that the tractor trailers start coming in at 2 a.m. with the last delivery at around noon. The packages will then be transferred from the warehouse to the delivery vans with the Amazon logo that are becoming ubiquitous. From what Babino learned, 18 vans will be going out every half hour.

Dennis Graham, a CPCA director, said, “Amazon loads up these vans and they’re thinking that the first release will be at 9:30 a.m., and most of them will be released by 12:30 p.m. And that’s during their off-peak season. But in November and December, all bets are off.”

Though Amazon indicated that traffic will be less impactful than when Waldbaum’s was operating, residents were concerned.

“Is there enough room [for trucks] on Voice Road?” a resident asked.

Graham replied that tractor trailers used to make deliveries to Waldbaum’s via that road.

When someone asked if the trucks will not compete with shoppers who already used that busy commercial/retail area, CPCA Vice President Kevin Ketterhagen pointed out that the plan is to have deliveries overnight, ending at noon.

Russell affirmed that Amazon will have to do a traffic study as part of the application process with the town.

“My biggest concern when we met with them was the traffic, and the impact on the residents in the surrounding area,” she said, noting the heavy traffic already present.

CPCA members said Amazon’s estimate was that 400 to 500 employees would be hired to staff the facility.

Graham stated that at any given time, there might be 11 or 12 managers and 70 employees, with more during the busy season. The vast majority will be part-time workers.

Resident Steven Bruno said that there isn’t a decent grocery store standing nearby.

“Very sad for the older residents of the community who would prefer not to go to Old Country Road for decent grocery options,” Bruno said. “I guess they can get Amazon Fresh.”