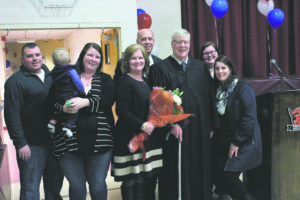 He was appointed acting village justice in 1995 for the Village of Mineola and was then elected in a special election the following year. Since then, he has served as the village justice for the past 23 years. Sadly, village justice John O’Shea, who left an indelible impact on the community, passed away last month.

“If I had to describe my dad in a few words it would be loyal, honest, quick witted, distinguished and a gentleman,” Katie Dugan said, who is O’Shea’s daughter. “He was a family man. He loved spending time with his family and most especially his grandsons. I think we can all agree Poppy was his most treasured title.” 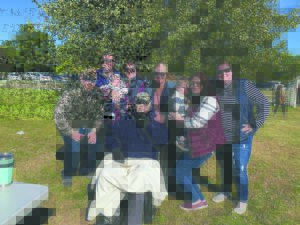 In addition to serving as village justice, O’Shea was a practicing attorney and served as a judge at the Nassau County traffic court. He was involved in the community over the years in many ways as the Mineola Library board president, the president of the Nassau County Magistrates, an active member of Knights of Columbus Council 2502, coach of many of his daughters PAL teams over the years and president of the Long Island Big Apple Volleyball Club.

“Dad had an innate ability to relate to anybody he came in contact with,” Dugan said. “Looking back, he had so many friends from so many different backgrounds and areas of his life. I think in many ways it is a testament to who he was. I have heard Mayor Strauss tell stories of being in his office and hearing laughing from the courtroom while dad was on the bench. He approached all aspects of life like this with a calming presence and always a touch of humor.”

O’Shea and his wife Kathleen met in the summer of 1976 and were married on Aug. 28, 1982. The two moved to Mineola in 1984 and have been residents ever since. O’Shea leaves behind three daughters Kaitlin, Colleen and Maggie, two grandsons Jack and Liam, his son-in-law Owen and his future son-in-law Denis.

O’Shea’s colleagues can agree that he was certainly someone special. 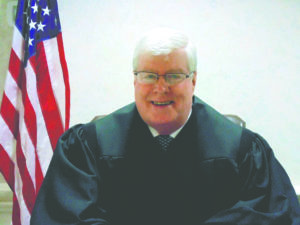 “I worked with Judge O’Shea for nine years,” village court clerk Elizabeth Bernardes said. “Judge O’Shea was very well respected and well liked. In turn he had regard for anyone that came before him in the courtroom or outside of it. He treated everyone with dignity. When he was on the bench, he controlled the courtroom and defendants would respect his decisions even when they weren’t too happy to pay the fine. My favorite line of his was, ‘Ignorance is not an excuse.’ He had a dry sense of humor and was quick with a witty response, which was always appreciated due to the stress of court nights. As a court clerk, I am not always treated with the same reverence as the judge is, but Judge O’Shea always had my back. He had an enormous love for his family. His eyes would light up speaking of his daughters and especially the newest additions to the family, his grandsons. They kept him going. It was a pleasure and an honor to work for Judge O’Shea. He is greatly missed.”

“John and his family have lived in Mineola for 35 years,” Strauss said. “From the first day of moving to Mineola he became involved in the community. He joined the Hampton Street School site based management team. He was a coach for the Police Athletic League for softball and basketball and was deeply involved with the Corpus Christi Knights of Columbus. John also served on our library board as a trustee and president. Professionally, he was admitted to the New York State and the federal bars. He has been a practicing attorney for 37 years and a law professor since 1988. Judge O’Shea was also a judicial hearing officer in Nassau County traffic court. As a member of the Nassau County Magistrates Association, he rose through their ranks and served as the president of this prestigious organization. More important to Judge O’Shea than his profession was his family and friends. His wife Kathleen and daughters Kaitlin, Colleen and Margaret were his life. He cherished his friends and extended family, but his wife and daughters were everything to him. He always proudly spoke of each of them. Judge O’Shea was a true professional. He had a great temperament sitting on the bench. He was understanding, compassionate and he had a great sense of humor. We were extremely lucky to have him as our village justice for the last 23 years. To John’s wife Kathleen and his daughters, all I can say is thank you. Thank you for supporting him as he chose to serve as our judge. Thank you for encouraging him to seek his goals and dreams. The O’Shea family has lost a great husband and a great father. The Village of Mineola has lost a great jurist. We all have lost a great friend.” 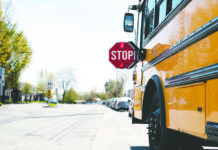