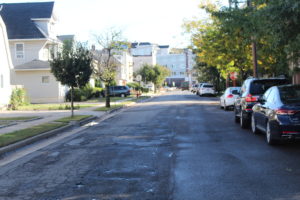 Mineola’s downtown has faced quite the transformation over the past few years with much more left to go. Parking in the village is a hot commodity, especially near NYU Winthrop Hospital and the Mineola train station. The topic of parking was brought up once again at the village’s most recent public meeting as resident Alizon Martinez told the board of trustees about metered parking on Harrison Avenue.

“I’ve been a resident for five years now and the parking situation has never been ideal, but now, it is unbearable for all the residents on Harrison [Avenue],” said Martinez. “When we first moved in, we were told meters run from 8 a.m. to 6 p.m. Mondays through Fridays, excluding weekends. It was brought to my attention later on that was not the case and that the meters were from 8 a.m. to 6 p.m. Monday through Saturday. That was brought to my attention until I reached out to the mayor who informed me of the changes.”

Martinez told the board that when half of her block is full of meters with the other half for alternate side parking, there is absolutely no parking available for residents in the highly commercial and populated area, saying that it’s become a real issue.

“Commuters, visitors and nonresidents take advantage of finding parking on our block and to not pay for meters and in return, residents are left without parking,” explained Martinez. “On a good day, there are maybe 10 parking spots that are unmetered for the whole block. When I had spoken to the mayor, he mentioned that the close proximity to Winthrop, the train station and the courthouse, is more reason to have meters because if there weren’t, commuters and employees of different businesses would park all day, which in return would hurt businesses in the area. With all due respect, I think you’re incorrect. The extended meter hours that are located in residential areas like Harrison only affects residents. That’s more so because after 6 p.m., businesses start to close and commuters start to go home, and now we’re left at having to pay meters at 9 p.m. at this point. Not all of us have driveways and now we’re getting ticketed even more because I understand there’s been a change in staff.”

Martinez’s main goal for telling the board her parking woes is because she wants the meters removed on Harrison Avenue and have the village issue resident parking permits and enforce resident only parking between the same hours of 8 a.m. to 9 p.m. Monday through Saturday exclusive to federal holidays. The requirement of the parking permit would prevent nonresidents from taking advantage of residential parking.

“We are considering rolling back the time from 9 p.m. to 6 p.m.,” said Mayor Scott Strauss. “We can’t give out resident stickers so they can park in the streets. It’s illegal for us to do that. We have to do the best we can. We continue to change parking regulations. The last thing we want to do is hurt any resident. We just want to keep the vehicles flowing and turnover. If you think there’s a better way of doing things, then we’re all ears. We can, have and will continue to adjust parking regulations throughout the village to do everything we can to help the businesses and the residents.”

Martinez also informed the board of an incident that happened on Aug. 24 in regards to parking at the meters and the village’s new parking staff.

“On Aug. 24, my neighbors were all outside upset,” said Martinez. “Every single vehicle parked at a meter had a ticket and they were all residents. Not one of them was a commuter or visitor of any sorts. We were all extremely confused. We had no idea that there was a change.”

Strauss told Martinez that there was no change in the meter times at all and that the only thing that ultimately changed was the meter enforcement.

“From our perspective since nothing was being enforced for so long and now all of a sudden, it’s being enforced, it sends mixed messages and now we’re confused,” said Martinez.

Strauss told Martinez that the board has already had conversations about rolling [the meters] back from 9 p.m. to 6 p.m.

“My concern would be eliminating the Saturdays,” said Strauss. “I asked the board individually about their thoughts about enforcing. We were kicking around at a public meeting to help some of the businesses on Sundays, your block wouldn’t be affected, that we were looking to possibly enforce meters on Sundays. Only because businesses in the downtown area have no parking on Sundays because people, who use the train to go into the city and would park at a meter and their car wouldn’t move all day long. They can’t find a place to park.”