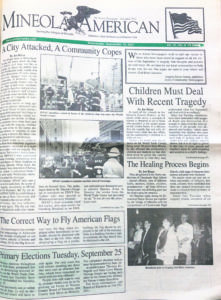 This week marks the 18th anniversary of the 9/11 terror attacks that changed the country forever. Back in 2001, the Mineola American, had many articles about that fateful day throughout its Sept. 19 edition.

The main story that week was “A City Attacked, A Community Copes,” which showed members of the Mineola Volunteer Ambulance Corps (MVAC) standing in front of the decimated World Trade Center. The MVAC responded with an ambulance to Shea Stadium where they were directed to Chelsea Piers and remained there for stand-by coverage. The MVAC also sent a fly car to Ground Zero where they assisted FDNY EMS in establishing a triage area at Pace University and assisted in rescue efforts. The next day the MVAC and its fly car went to St. Vincent’s Hospital to transport an FDNY firefighter who was injured to Winthrop-University Hospital.

At each of the schools in the Mineola School District a moment of silence was observed at noon to remember the victims that perished.

In the article “The Healing Process Begins,” residents and local elected officials of Mineola gathered in the Darby Auditorium of Chaminade High School to grieve together and pray for America by singing “God Bless America.”

Mayor Scott Strauss, who was a member of the elite Emergency Services Unit (ESU) within the NYPD, along with his squad, was dispatched to the World Trade Center that day.

“The firefighters, the police officers and emergency medical personnel climbed the stairs with their equipment—encouraging people to continue their dissent and not to stop for any reason,” said Strauss at last year’s 9/11 memorial ceremony. Strauss was a part of the rescue operation of Port Authority officers Will Jimeno and John McLoughlin.