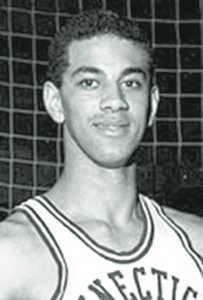 Whenever one writes a history of any sort, including that of the Mineola High School athletic program, there are bound to be honest omissions. So thanks to reader Rick Ueland for reminding us of the achievements of Bill Corley, a Williston Park native and 1964 Mineola High School graduate who was one of the greatest hoopsters in the school’s history.

“Bill Corley played basketball in the early 1960s and went on to a legendary career at the University of Connecticut,” Ueland writes. “Bill was a friend of mine growing up and was one of the finest gentlemen I’ve ever met. Unfortunately, he died in his early 50s.”

Corley played for the UConn powerhouse in the mid-1960s. After star-studded careers at both Mineola and UConn, Corley was drafted by the San Diego Rockets of the old American Basketball Association (ABA) and played professional ball for the Harlem Wizards. For his career at UConn, Corley was inducted into the men’s basketball’s elite group.

Corley was a 6-7 ft. center/forward who holds the UConn basketball single-game scoring record of 51 points, set against New Hampshire in 1968. A member of the UConn Basketball 25-member All-Century team, Corley averaged a rare double-double in points and rebounds in his three-year varsity career at Connecticut (16.9 points and 13.7 rebounds).

Corley still ranks third all-time at UConn in career rebound average (13.7 per game). He was a three-time All-Yankee Conference and All-New England selection (1966-68) and a two-time NABC All-District First Team honoree (1967-68). Corley completed his UConn career with 1,219 points and 986 rebounds.

He was a three-time All-Yankee Conference First Team selection and scored 21.1/game while adding 15.2 rebounds per game as a senior. Corley ranks No. 23 on the UConn career scoring list with 1,219 points. After his athletic career ended, he then established himself in the business world, spending 25 years with IBM and rising to the rank of senior program manager of Global Channel Marketing.

Corley, as noted, met an untimely ending, passing away at age 52 on July 31, 1999 in Marietta, GA. He was survived by his wife Kathy and three children: Angela, Lauren, and William Jr.

After her husband’s death, Kathleen Corley remembered her husband in an interview. The couple, she recalled, met on a New York City subway when Corley was working for Mass Mutual as an insurance broker. The future bride liked sports and often traveled with Corley when he played for the Wizards. Working for IBM meant more travel for the growing family.

“Employees of IBM joke that they work for IBM which jokingly means ‘I’ve been moved.’ We moved from New Jersey, to Atlanta, to Cincinnati, to Connecticut and back to Atlanta,” Kathleen recalled.

Throughout the years, Corley remained a Huskies fan. In March 1999, he attended the NCAA tournament where UConn won their first national title under the legendary coach, Jim Calhoun.

“Bill was not a boastful person and he wasn’t a storyteller,” she said, adding that his athletic career contributed greatly to his success in the business world.

“I think being in sports always contributes to your lifestyle. It teaches you discipline. Team sports teach you how to get along with people.”

Corley will always be one of the greats of Mineola High School’s storied athletic program.