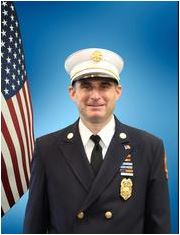 Mineola Fire Department Chief and Commanding Officer of Homeland Security for the Nassau County Police Department Robert Connolly was recently honored as Top Cop by Presiding Officer of the county’s legislature Richard Nicolello for an arrest he made in New Hyde Park that could have ultimately ended someone’s life.

“I travel all over the county doing preparedness lectures and working with other organizations, so this particular night I was coming home from an assignment and I was off-duty and I finished up around 10 p.m.,” explained Connolly. “I was driving an unmarked police car so I have my radio and I’m always listening to what’s going around. The type of call that I heard was that it was a 911 hang up, and when they [dispatchers] were able to reconnect with the woman, all she kept saying was send the police. Finally, the dispatchers were able to draw out that a man confronted her and threatened to come hurt her and her family and that he had a gun.”

The woman managed to give dispatchers a good description of the man’s car and what he looked like. Connolly, who wasn’t too far from the 911 call, drove toward the area and drove up and down the street.

“I didn’t see him, but I saw the woman come out and talk to uniformed officers,” explained Connolly. “I pulled over and just sat on the side to make sure that everything was quiet. The uniform officers told me that the subject was there earlier and did display a gun and they were called for a canvas.”

While Connolly was sitting on the side, he saw a car come slowly down the street toward the area, which stopped mid-block and abruptly made a U-turn and sped off piquing Connolly’s interest.

“I said, ‘that has to be the bad guy.’ He saw the uniform car and he took off,” said Connolly. “I went after him and was able to pull him over. I got him stopped and I know he’s got a gun, so I played it safe. I’m in my full dress uniform, so I’m reaching behind my seat for my bulletproof vest and put it on and called for additional cars. I had a uniform guy show up very quickly, thankfully, and we did a felony car stop.”

Connolly and other officers pulled both the man and his passenger out of the vehicle and uncovered a loaded handgun inside the car.

“It was literally a block away from her house,” said Connolly. “I think his intent was to come back there and at least menace, if not, do harm to her. It was a good grab for all of us that night. Most importantly, we got an illegal gun off the street. Sometimes evil comes to good neighborhoods.”

Connolly, who is now the new chief of the Mineola Fire Department, has strong roots in the emergency service community—especially in Mineola— and became involved with the fire department as a junior firefighter.

“I’ve been chasing sirens since I was a teenager,” said Connolly. “I got involved in emergency service as a volunteer firefighter in Mineola and I’ve been working with a lot of great members. I’ve been a member for over 25 years now and when you’re in the firehouse the older guys in the firehouse will say ‘Hey listen kid, this is a great hobby, but you’ve got to get a good job and give up a Saturday, take the civil service test and get involved.’”

After taking multiple civil service tests, Connolly became a New York State court officer, a job that he did for nine years.

“It was a great job and I recommend it to anyone that wants to get involved in law enforcement,” said Connolly. “My passion was always being a police officer. So after nine years with the courts, I got a phone call on a Christmas Eve one year asking me if I would be willing to switch jobs and I never looked back. I’ve now been with the county for 15 years and I’ve had a great career here. I did 11 years in New Hyde Park on patrol, I was a sergeant down in the Fifth Precinct and then most recently for the past four years I’ve been in Homeland Security.”

Now that Connolly is once again the chief of the fire department, he hopes to maintain the progress that the department has made thus far.

“We’re embarking on a new chapter with our firehouse and in the probably very near future be rehabilitated or replaced due to age, so I’m looking forward in laying the ground work so to speak for that project,” said Connolly. “I might not be able to see it completely through, but make sure that we maintain a state-of-the-art facility and continue to train firefighters with the equipment to do the job that they have the passion for doing.”

In the end, Connolly said that police work is part luck and part skill, both of which he had that night.

“I had the luck of being in the right place and the right time, and the feeling of a sixth sense and it all came together with good aggressive police officers that were on the scene that night and we were able to resolve a potentially bad situation,” said Connolly. 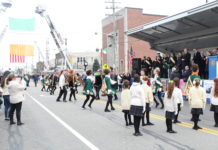 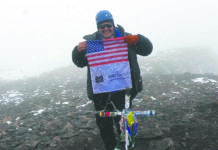