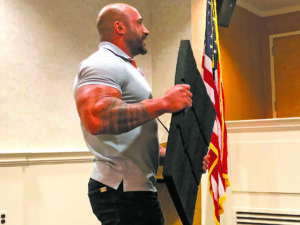 At last week’s public hearing at village hall, Noah Siegel, the owner of the Mineola-based Siege Athletics gym, went before the board of trustees to tell them about his plans to expand his gym, which drew complaints from residents about the constant vibrations and noise that is emanating from Siegel’s gym.

“I’m very proud and very passionate about what we do at Siege [Athletics],” said Siegel. “I don’t take my responsibility lightly and every move I make is crucial to our survival. The next step is a big risk, but a necessary risk to ensure that me and my team flourish. We cannot stay stagnant and become complacent in our success.”

The expansion will include the building of a full service changing area with showers in order to allow Siegel’s early morning clientele to change and head straight to work after their workouts.

“The area our locker rooms will occupy requires more surface area to work in,” explained Siegel. “The additional area that we’re having will not be a weighted area. It will be turf only. On that turf, we’ll have a baseball and lacrosse team practice.”

The new indoor facility will be open year round for speed, agility and conditioning drills, and will allow the gym to have a better setup for its Olympic weightlifting session, which the gym can then reinforce and use better floor platforms. Siegel’s plan is to move closer toward its Jericho Turnpike side of the building in order to create less noise and vibration for nearby residents. According to Siegel, the additional space is needed because everyone inside the gym is working on top of each other.

“I need more room to spread everyone out and train,” explained Siegel. “The additional space is really for those amenities that we don’t have, which is two showers for the women and the men and an additional locker room area, so that would take up 700 to 800-square-feet and would push everything out more. We already have 1,500-square-feet of turf in our facility where we have a batting cage and lacrosse net, but in the fall when all the kids come inside, we’ll have 12 to 15 kids on the turf and our daily members, who are used to using the turf, can no longer use it, so they get upset. It makes the situation difficult, so all I’m looking to do spread is everybody out.”

Trustee Paul Cusato didn’t have an issue with the application, but instead had an issue about something that Siegel posted on his gym’s door a few days prior.

“About three days ago, I see a sign posted on your front door that said ‘New meter maid. Very bored. Likes to hurt small business. Pay meter.’ Why would you do that?” asked Cusato. “Why would you insult our village and why would you insult the people who are employed to do their job? I have to go back to the [original] hearing. The area is serviced with on-street meter parking. You were well aware that there was meter parking. Shame on you.”

Siegel responded that it was a poorly-worded sign and it was a bad judgment call.

“The contention was that obviously there’s a new meter maid and there are a lot of broken meters on the street and the old meter maid knew that,” said Siegel. “Once the new meter maid came, it caused an emotional outburst and I reacted poorly.”

Trustee Dennis Walsh said that he is aware of residents’ complaints about vibrations and visited Siegel’s gym three years ago to see for himself what is happening inside the gym.

“You have mats in the area where weights are thrown on the ground,” said Walsh. “I stood about 8 feet away from you and you picked up this weight that looked like it weighed like a car and threw it down on the mat and I didn’t feel any vibrations at all.”

Siegel said that he is installing new technology mats to further reduce any vibration or noise within his gym and brought a sample of it to show the board.

“This is ballistic reinforced rubber,” explained Siegel. “[We’re installing] two-feet-by-two-feet, 1.5 inch ballistic rubber mats and we’ll have installation on those platforms, so when they do drop weights it will be virtually impossible [to feel anything].”

When it came time for public comment, residents who live on nearby Arlington Street, which is located behind Siege Athletics, voiced their disapproval about the gym.

“Does he flip tractor tires at the gym?” asked resident Richard Corso. “If he does, it sounds like someone is blasting dynamite in my basement. The vibration is incredible. I’ll invite you down to my house anytime he’s doing whatever he’s doing in the gym over there and you can hear it and see it for yourself.”

“We hear the vibrations not only from the tires, but from the weights as well,” she said. “The vibrations on our side of the street, you definitely hear it and feel it in the house.”

Resident Frank Bancone asked the board to postpone its vote on Siegel’s gym expansion for a myriad of reasons.

“I’d like to ask the board to postpone its vote on the expansion of the gym for reasons that many of our neighbors are on vacation right now and that they cannot come here and show their concerns about the noise and the vibrations that are going on,” said Bancone. “If that’s not possible, I’d like the board to vote no and to open an investigation concerning its [Siege Athletics] practices for numerous reasons.”

Bancone said that there are safety issues with weeds growing into the walkway as well as the gym not adhering to its approved business hours and parking issues.

“Vibrations can start as early as 6 a.m. and end as late at 9 p.m.,” said Bancone. “Mr. Siegel has not only dismissed our concerns, but also Mr. Gibbons, who worked with us for a while about these concerns. He would not engage with Mr. Gibbons and instead had the real estate company respond to the inquiries.”

Siegel had an opportunity to respond to the residents concerns and said that most of the vibration issues would be resolved with his expansion.

“If we have that area, we’ll be able to put better material and try our very best to reduce any vibration,” said Siegel. “I understand the neighbors concern. I’m trying my very best to address those concerns with my expansion where I feel it’ll make the quality of life better for everyone. There’s a weight platform in the back left hand corner of the gym right now. My guess is that’s what’s causing some vibration because people do pick up heavy weights, but we’re going to take that platform and move it to the front of the store. It’s simple.”

The board motioned to reserve their decision to a later time.