At last week’s Mineola board meeting, the village board heard a presentation about the imminent Long Island Rail Road (LIRR) Expansion Project from consultants from the LIRR and 3TC, the design-build contractor for the third track installation.

The LIRR Expansion Project will introduce 9.8 miles of a new third track from Floral Park to Hicksville by closing dangerous grade crossings and upgrading stations along the heavily traversed main corridor. More specifically for the Village of Mineola, the grade crossings at Willis Avenue and Main Street will be eliminated. Two parking garages that include the Harrison Parking Garage and the Mineola South Parking Garage will also be built, while the Mineola train station will see enhanced improvements.

Residents have already seen the beginning stages of the Harrison Parking Garage being built in October of last year. The garage will represent an increase of more than 450 parking spaces serving Mineola train station commuters, village residents and visitors. 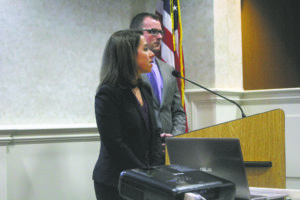 “As part of our very robust community outreach program, it’s important to us that we communicate with all the villages and towns throughout the course of the project,” said Leslie Mesnick, who is a community outreach manager to the MTA and LIRR.

In terms of eliminating the grade crossings, Willis Avenue will be shut down entirely during the elimination of the Oyster Bay and Main Line crossings that are on the avenue, according to Travis Brennan, director of community outreach for 3TC. “We understand that you have a lot of construction going on and it’s all tying into a new and improved village, and we wanted to be a part of that.”

When it came time for the board to ask Mesnick and Brennan questions, deputy mayor Paul Pereira asked about the concrete barriers that are currently around the Harrison Parking Garage construction area, which will take approximately 18 months to completely build.

“I’ve gotten some complaints from residents who live on Harrison not being able to back out of their driveways or having difficulty,” said Pereira. “Now that we’re starting to excavate…how long do they have to be there?”

Brennan responded that those barriers are there for code, compliance and safety.

“We are not anticipating that those have to be there for the duration of the garage building,” said Brennan. “They are going to be there for an extended period of time. Once the foundations are poured and the garage is starting to be erected, and we’re basically working within that work site, you’ll start to see some of those traffic control measures relinquish.”

Pereira also asked Brennan how 3TC would eliminate the Oyster Bay Line at Second Street, which wasn’t initially going to be eliminated because of its proximity to Willis Avenue.

“We were going to keep the Oyster Bay crossing and eliminate the Main Line crossing,” said Brennan. “I think from an engineering and contractor standpoint that was not the best way to go about building this project. With the amount of traffic that Willis Avenue receives and other areas, I think it was in the best interest of not only the village, but the contractors to try and do what they could and eliminate both of those crossings. We’ve had meetings internally with the mayor and the team and we’re still working on an engineering solution to enable us to eliminate those two crossings.”

Trustee George Durham inquired about how construction vehicles will enter the village. Brennan responded that 3TC does in fact have access points.

“We have haul routes, we have site plans, we have ideas on how we’re going to get there,” said Brennan. “Those can change, but the idea that we’re going to bring trucks in the area on Harrison, drive them onto the job site, but also at times have to be on First [Street], depending where we’re working. So it’s fluid and it changes.”

Trustee Dennis Walsh asked about the hours of construction that would be needed for the placing of the retaining walls near residents’ homes who live near the main corridor.

“There are times where we have to be back there at night,” said Brennan. “We have very limited time to build this project, but what I will pledge here today is that we’re going to start off by working during the day. If schedule falls behind or if there’s a need for us to accelerate a certain portion of it, we would have to go to double shift.”

“We try very hard to manage people’s expectations, we want to make clear that throughout the course of the project, you will hear some overnight and weekend work,” said Mesnick. “It can be graveyard shift.”

Brennan finished by saying that a traffic study is also in the cards for the village if warranted.