On what would have been his 19th birthday, Mineola High School senior Christian Melendez was laid to rest by his family last Thursday after tragically passing away due to a car accident that took place in Williston Park over the school’s holiday break.

Outside of Mineola High School, students, faculty, village officials and members of the community stood along Armstrong Road to pay their respects to the varsity soccer player. Standing front and center of the school were Melendez’s family, teammates and coaches who donned black T-shirts with Melendez’s team number, which was 10.

To those who knew him well, Melendez was described as a kind, caring and funny individual who would always put himself out there when it came to others.

“Christian was a very committed person to his school, his family and his soccer team,” said his varsity soccer coach Al Cavalluzzo. “He was extremely reliable and would always find a way to come through for you. He accepted and befriended everyone.” 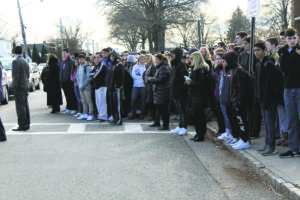 “Christian was an exceptional soccer player on the field,” said deputy mayor Paul Pereira, who was Melendez’s soccer coach for the past three years. “As a sophomore, he was an All-Conference player, which is very impressive. As a junior, he was All-County honorable mention and this year as a senior he was not only All-County, but he was also on the Nassau County Senior All-Star team that played against Suffolk County. He improved every year. He was great at soccer to begin with, so as a soccer player, you couldn’t ask for much better. He had more than 20 goals in his career; he was the kind of guy who never shied away from the pressure of a big moment.”

According to Pereira, Melendez was proud to be named captain of the high school’s soccer team this year as well as the fact that he got to wear number 10.

“In soccer, the number 10 is very emblematic of being a good soccer player,” explained Pereira. “It’s something that’s symbolic and he wanted that pressure and he filled the jersey, the number and expectations really well.”

Melendez was also described as someone who couldn’t be placed in a box and that he was friends with everyone.

“As coaches, with myself and Al Cavalluzzo, we look as these kids as our family,” said Pereira. “They’re our kids. Sometimes there is banter back and forth, but he could take it and he could dish it. He was always in a great mood and that’s what I remember him as. He was never negative. He has friends at Carle Place and Wheatley, our competitors who play soccer against him, who reached out to me and expressed their sorrow and their loss. They liked Christian.”

Melendez was someone who had a deep love for the Village of Mineola and his high school.

“He loved Mineola,” said Pereira. “Just everything that he wore had Mineola on it. When we sold shirts or jackets or anything gear related, he would buy two, three or four of them. I think every day he was wearing something that said Mineola on it.”

Before leaving for the cemetery, Melendez’s father Jose thanked onlookers in front of the high school for their love and support that they have shown the Melendez family before tearfully saying “to all of you, live like a champion.”

Since the accident, a GoFundMe page has been created to help the Melendez family. If you would like to donate, visit www.gofundme.com/vhdus-helping-a-family-in-need. A Change.org petition to have a mural painted at the high school in Melendez’s honor has also been created with 1,450 signatures as of publication.

To read more about a soccer game that Mineola High School had in Melendez’s honor, pick up this Wednesday’s edition of the Mineola American.