For the first time since 2009, Mineola High School’s marching band placed first in their division at the New York State Field Band Conference State Championship that was held at the Carrier Dome in Syracuse last weekend—capping off one of their best seasons in recent history.

Placing first in the Small Schools II Division with a score of 85.05, the marching band’s show was called A.I.: Artificial Intelligence and was written entirely by Mineola staff members, including Ken Kamping and Chris Toomey, who is the high school’s band director. 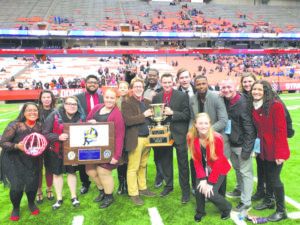 “Marching band is a practice intensive activity,” said Toomey. “We started our rehearsal season last May, worked through the summer and went away to a camp in Honesdale, PA for a week. When we returned we engaged in a rigorous schedule of two nights a week and usually both weekend days. Each week we would listen to judges’ critique and work to make improvements.”

Toomey said that his proudest moment of being band director supersedes anything the marching band could do physically, but instead, it was the lifelong relationships the band members developed with one another and the positive influences they have over each other.

Cliff Datys, whose son Max plays the timpani in the marching band and is a senior at the high school, said winning has been the most amazing journey for Max and his fellow bandmates.

“We have seen them work very hard over the last five seasons, giving up their evenings, weekends and summers to work on the year’s show under every imaginable condition,” said Datys. “It is a true testimony to the hard work of the kids and the band staff. As a pit parent, I’m so honored that they allow me to share in their journey.”

District Supervisor for Fine and Performing Arts Joe Owens said that the marching band has always been a source of pride for the school.

“It continues to grow and improve and we couldn’t be more proud of the nearly 100 students who participate,” explained Owens. “Success like this wouldn’t be possible though without the support of the entire school community, our board of education, central administration, high school administration, teachers, students, parents, custodians, clerical and bus drivers.” 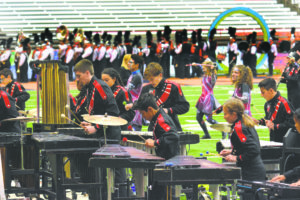 In a New York State Field Band Conference (NYSFBC) Competition, announcers always begin by announcing the lowest scores first. The further a band goes without having their name called, the higher their score is.

“When the third place band was called, we knew we were either second or first,” said Toomey. “With our hearts racing and hands shaking, the announcement for the second place band, which was not us, indicated that we were the champions.”

The students were quiet and respectful until they were officially announced as the winners.

“At that time, the energy was pure elation. The look on the student’s faces was that of pure joy and euphoria,” said Toomey.

The band was welcomed home by members of the school community and a special escort from the local fire department.

Connolly’s two daughters Megan and Melissa are in the marching band’s color guard.

“We invited every fire department in the school district to participate,” explained Connolly. “Albertson, Williston Park and Mineola Ambulance joined the Mineola Fire Department in the fanfare. Many of the firefighters involved were high school alumni and one was a member of the last championship band in 2009.”

Connolly also reached out to the Nassau County Police Department for assistance, with the county’s third precinct and school resource coordinators from the county’s Homeland Security providing a police escort right down Jericho Turnpike through Mineola into the high school.

“It was impressive and well deserved for our champions,” said Connolly.