Mayor Scott Strauss, who is dealing with the problem himself, said that the issue of feral cats is a health hazard.

“Nassau County’s public ordinance states that no animal can be fed out in the open in a way that causes food to be available to rodents,” said Strauss. “If you feel that your neighbor is violating this code with cats, consider having a friendly chat with them about it. They might not even realize they’re doing it and that it’s a problem.”

Strauss also recommended that residents call the Nassau County Board of Health who will send a letter to the neighbor, which might lead to an ordinance or a summons if the problem continues. 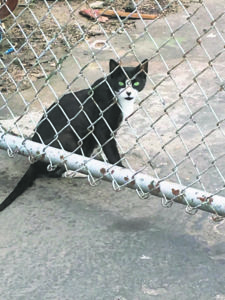 According to the Nassau County Department of Health, the feeding of feral cats is only allowed if it does not create a public health concern. The department would respond, however, if the feeding is causing an accumulation of animal waste that produces an insect pest condition or a very severe odor condition.

Trustee Dennis Walsh, who spoke to the Town of North Hempstead Animal Shelter feral cat coordinator Lisa Studley, said that residents can call 311 and ask to be put on the town’s feral cat program.

“If you want to have a trapper come to where you are with your cats it takes about a year,” said Walsh. “However, you can contact 311 and Lisa will make arrangements to give you a crate two days before the spaying to bring the cat to the Town of North Hempstead Animal Shelter.”

Walsh said the shelter, which spays 400 cats a year, will spay and vaccinate the cat among other things. The resident will have to come and pick the cat up and return it to where it was captured. Residents can also hire a trapper themselves who will coordinate with Studley to remove the cats.

“The infestation of cats always comes from excessive feeding,” said Walsh. “There’s always a feeding station that brings cats to the area.”

Although it is not illegal to feed feral cats, the Department of Health recommends that feedings are supervised for no more than 30 minutes two or three times a day. The department only responds if the feeding is causing an infestation of rodents.

Mineola resident Robert Sckalor, who voiced his concerns to the board last fall, said the problem is still existent even after contacting the Town of North Hempstead. Sckalor said his yard is covered with flies along with the overwhelming stench of cat feces.

“I don’t think a program that makes a taxpayer wait 12-18 months is a viable solution,” said Sckalor. “Between the time I was here in the fall to now, two litters of cats have reproduced on my block. I was wondering if Mineola could create their own programs or codes where we as a community solve our own problems.”

Strauss said that he would reach out to town supervisor Judi Bosworth and Councilman Angelo Ferrara who is the village’s representative for better assistance.

“We pay our county and town taxes for that service,” said Strauss. “What we need to do is that we need to make their service a little bit more efficient. I’m not so sure it’s something that we can undertake or are willing to undertake at this point. Folks, don’t feed the cats. That’s the root cause and it’s creating other problems.”

Deputy Mayor Paul Pereira said that he understands that residents are used to coming to 155 Washington Ave. for their problems, but thinks this problem is better suited for 200 Plandome Rd. in Manhasset.

“They have meetings like this at the town where the public is allowed to speak about any issue,” said Pereira. “You need to put them on the spot where pressure is put on the people who represent you.”

Ricardo Gonzalez who lives on Marcellus Road said he has seen about 18 cats on his neighbor’s driveway at a time.

“They live under my car,” said Gonzalez. “They scratch my car and you can see all the scratches on my hood. My lawn is covered in feces. We’ve called the health department a bunch of times and they do nothing.”

Michelle Nunziata who also lives on Marcellus Road said her mom and her neighbor’s dog contracted ringworm because of the cat feces.

“This summer alone there are three or four litters of kittens,” said Nunziata. “When we found the kittens, we decided to search the window wells and we found a dead cat. It’s a major health problem.”

The village board urged residents to call their elected officials such as councilman Ferrara, 311 and the Nassau County Health Department, which can be reached at 516-227-9697.

“We pay for the service already,” said Strauss. “Let’s put pressure on the town to make it more efficient. They should provide the service to us.”