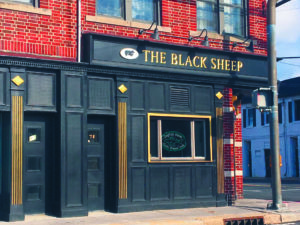 As a continuation from last December’s public hearing, the owner of the Black Sheep Ale House, Vincent Minutella, presented his revised plans for his beer garden to the village board at last Wednesday’s meeting.

Before Minutella gave his presentation to the board, village attorney John Gibbons read a statement from the Nassau County Planning Commission who disapproved Minutella’s proposed beer garden expansion. The planning commission said the reasoning behind their disapproval was because the impacts of such a nuisance to nearby residents was unavoidable. Some of those nuisances included live music, odor fumes, traffic and loitering onto nearby homes.

Minutella told the board that since the last time they’ve met, he’s made various changes that rectified any issues or concerns that were previously brought up by the board and concerned residents. Minutella said that he hired landscaper Tom Cahill, from Hicks Nurseries, to help address the potential sound issues the beer garden would potentially pose.

“With his guidance and expertise, we have completely redesigned the beer garden,” explained Minutella. “With this new design, I believe…we’ve addressed the issue of sound abatement. I think it will be better than it is now.”

Minutella feels that his beer garden would be a positive addition to downtown Mineola, having received overwhelming support from the community since the Mineola American’s publication last month about Minutella’s plans for expansion.

At the hearing, Minutella said that he was unsure if the Nassau County Planning Commission completely understood his proposal about live music. Minutella said live music would only be on the premises if there was a private party or special event that the Black Sheep was hosting. At that time, the music would be killed at 10 p.m. during the week and 11 p.m. during Fridays and Saturdays.

During last December’s public hearing, trustee Paul Cusato brought up the issue of the outside compressors and the noise level they would produce.

“My bar manager got in touch with the manufacturer to ask about the decibel level of the machinery,” said Minutella. “We were told that they couldn’t give us a specific decibel level. They said it was generally no louder than a household air conditioner. That’s not good enough, so they [the compressors] are dead. They’re going to be in the basement.”

To further abate any noise problems, Minutella will also put a pergola and a row of 10 foot arbor vitae in the back area of the garden where residents reside. A new addition, a seven foot PVC fence, will also be added to the beer garden giving a total of five levels of sound abatement.

hearing and voiced their opinions to the village board.

Mineola resident Terence Hale voiced his opposition for the proposed beer garden. Hale said it’s not about the issue of sound but about the quality of life.

“I like the idea of a beer garden but not in my neighborhood, not right down the block,” explained Hale. “It’s not fair to us residents here.”

Mineola resident Louise Powers told the board that she was in favor of the beer garden because it would be a nice place to eat and socialize.

Mineola resident Michelle Avila agreed with Powers. Avila told the board that the new restaurant and beer garden would bring more jobs to the area and would cater to the younger crowd of people who are moving into the new apartments downtown.

“I think it’s a nice additional upgrade to a bar that’s been in the neighborhood for 100 years,” said Avila. “I’m all for it. I think it’s a great idea.”

Albertson resident Matthew Luce also voiced his support for the beer garden and restaurant. Luce said the Black Sheep is overall quiet compared to the various other bars in the area who play the soccer games during the World Cup.

“You go out on Mineola Boulevard and you can’t be at any house within two to three blocks and not feel the vibration of people chanting, and screaming and pounding,” said Luce. “Let alone the noise. I’m talking about vibrations. You’re not getting that there [at the Black Sheep].”

Luce also told the board to look at a village like Rockville Centre who is profiting nicely from establishments like the Black Sheep.

“A lot of money is going in there,” said Luce. “Wouldn’t it be nice to have it come to Mineola?”

Minutella also told the board that he is open to conversation about his continuous plans for the beer garden and wants to keep an open dialogue.

Mayor Scott Strauss and the board of trustees closed the public hearing and voted to reserve their decision for a later date.