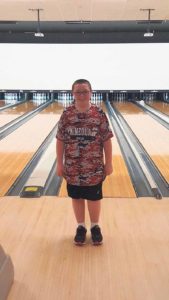 Mineola eighth grader Phil Macchietto competed in the annual Nassau County Individual Bowling Tournament on Saturday Feb. 10, at Garden City Bowl. The tournament was comprised of all the boys who averaged more than a 200 for the 2017-18 season. This year, there were 21 bowlers competing to represent Nassau County in the state tournament that will be held in Syracuse on March 10. To be on the Nassau County team, bowlers need to finish in the top six. Last year as a seventh grader, Macchietto was able to accomplish this feat and bowl in the six game state tournament.

In the first game, Macchietto bowled a 169 placing him in eighth place. Determined to improve on that score, he went out and bowled a 216—the best score of the day at that point which moved him into second place. The third game was Macchietto’s worst of the day as he scored a 166—but after a small break, he found himself in fourth to start the position round.

In the fourth game, Macchietto was consistent as he scored a 178 as he was able to make his spares but just couldn’t find the line to get some strikes, dropping to fifth. Macchietto kept battling as the strikes were few and far between but he kept making the spares and finished with a 182 for a pin count total of 911 after five games which dropped him into sixth place.

Macchietto only had a six pin lead on two boys who had a total of 905 and rolled his best score of the day with a 217, but it is how he got that score that is quite remarkable. Macchietto opened the sixth game with a strike and spared in the second to keep himself in the running. Trouble arose in the next three frames as he opened in the third and fifth with a spare in the fourth. In the sixth frame and the chances of Macchietto making the team dwindling, he proceeded to throw a ball that left a six, seven, 10 split. With nothing to lose, Macchietto took a chance and threw the best ball of his young career and made the split. The bowling alley went crazy and from that point on there was nothing that was going to stop him. He proceeded to throw strikes in the seventh, eighth, ninth and opened the tenth with another strike.

This was Macchietto’s only four in a row in the entire tournament. He finished with a nine spare to complete his finish with an 1128 pin fall. This was good enough for second place and a spot on the team. Macchietto finished with a 188 average on the day.