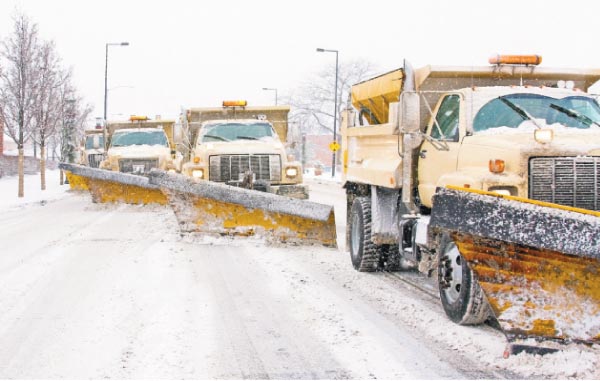 Last Wednesday at the final village board meeting for the month of January, members of the village board vented their frustrations about how the county dealt with the massive amount of snow that winter storm Grayson left behind earlier this month.

“And not certainly to say we don’t miss some spots or that we’re perfect but we certainly—with the resources that we have—considering the 35 miles of road that we have and the size of our village, I think we do an exceedingly amazing job,” said Pereira. “Conversely, the county—and I can attest to this personally, has not been doing a good job.”

Pereira said that his statement concerning the county’s handling of the snow removal was not a political one because the issue has been happening for many years under both Democratic and Republican administrations. Even though Pereira does understand that the blizzard happened at the beginning of Laura Curran’s tenure as county executive, he feels that Mineola was forgotten by the county.

“And I understand that the storm was worse than predicted and it was wind- driven and there were challenges,” said Pereira. “We had the same challenges they had. But I can tell you from where I’m standing, driving down Mineola Boulevard looking on the cross streets between Mineola Boulevard and Willis Avenue which are the village’s responsibility—it was like night and day.”

Mayor Scott Strauss and the other trustees wanted to make it clear that they were not beating up or lumping up on one particular person. They only wanted to point out a fact and to also educate some of the residents who sometimes assume all roads within Mineola are the responsibility of the village.

“We have a major hospital here and although it is at the end of a county street, oftentimes it falls to the village to clean it,” explained Pereira. “We have an underpass on Roslyn Road which is also a county road and it fell to us to clean it. Not because it’s our responsibility but because we felt that it was unsafe. So rather than waiting for the town to do it, we did it but that should stop. The residents of Mineola pay taxes to the county for these services and we deserve that service.”

At the board meeting, trustee Paul Cusato mentioned that he had the opportunity to question Richard Nicolello, Nassau County’s new presiding officer about the county’s poor performance when it comes to plowing county streets such as Mineola Boulevard, Willis Aveune and First Street during snowstorms.

“The residents blame us, the village for not plowing their streets,” said Cusato. “That’s not fair. I reiterated to Nicolello that something needs to be done. I wasn’t blaming him but he needs to send the word out to our new county executive. She needs to be informed about what’s not taking place here in our village.”

Cusato said that the village is doing their best to communicate better with Nassau County.
“This has to stop,” said Cusato. “Nassau County has to realize that Mineola is a part of the community and that they need to plow our streets.”

“He’s a great friend of ours and he’s always done great things by us,” said Strauss. “We’ve reached out to him as a resource trying to get some increased cooperation. So he will do everything he possibly can for us. Being the presiding officer, maybe it holds a little bit more weight. He is a great asset for us to have.”