There are few people that have been as influential on Mineola as Lou Sanders. The founder of the Mineola American and Chamber of Commerce was involved in almost every facet of local life, helping shape the village into what it is today.

The Mineola icon passed away on Friday, Sept. 15, at age 94, leaving an indelible impact on the community he dedicated his life to. 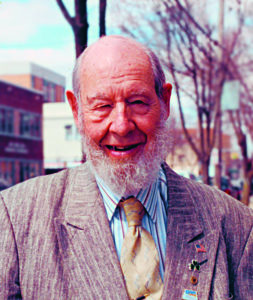 “There is no one I know that captured the spirit and hearts of those who lived here better than Lou,” said Gary Katz, director of the Mineola Chamber of Commerce.

Lou’s legacy of service started before his time in Mineola, as a member of the Combat Engineers in World War II. When he returned to New York in March 1946, the New York University journalism grad strengthened his writing chops at weekly newspapers on Long Island before heading to The Binghamton Press. All the while, Lou held onto his dream of starting his own paper, a dream that became a reality after his grandmother bequeathed him money after her death.

He went from village to village on Long Island, looking for the right place to launch his dream. After numerous meetings with merchants who promised their support, he printed the first edition of the Mineola American on Thursday, Sept. 4, 1952.

“It was the town that called his name,” said daughter, Annmarie Sanders. “He felt that it had a lot of potential.”

Through the black-and-white pages of the Mineola American, Lou captured everyday life in the village he held so dear, from local politics to school news to what was going on at area businesses.

It was a homegrown operation, with Lou not only serving as editor and publisher, but selling ads as well. Helping him every step of the way was his wife Grace, who proofread copy and managed the business.

The early days were hard, as Lou worked to establish roots and connections in his new hometown. But soon, the paper became a staple in Mineola, a valuable resource for residents who wanted to be in the know.

Though running the ins-and-outs of the paper was a lot of work, Lou got immense satisfaction from it.

“My dad loved it. This was his dream,” Annmarie said. “He just wanted to do something meaningful. He loved getting to know the people of Mineola and establishing so many relationships. It became his community and a place he loved and wanted to do the best for.”

In 1992, Lou sold the paper to Karl Anton, remaining on staff as a sales rep. He was a cheerful member of the Anton family, an old-fashioned newspaperman who donned a suit, vest, tie and polished shoes for every day of work. Never without a smile, Lou was always upbeat and ready to offer up-to-date commentary on how the Mets were doing.

“Lou was not just a die-hard fan. He was a most optimistic Mets rooter,” remembers Roslyn News editor Joe Scotchie. “Every Mets winning streak, even when the team was out of a pennant chase, brought forth optimism for the future. After the Mets played poorly down the stretch in 2007, losing a playoff bid, Lou was upbeat. Coming into the office at Anton the next day, he blurted out to Joe Rizza, a fellow employee, ‘We’ll get ‘em ‘08, Joey!’”
Lou was also proud of his Irish heritage. Like all sons of Erin, he eagerly looked forward to St. Patrick’s Day celebrations, always treating his coworkers to a big bash at a local hangout.

“Lou was a pillar of the village. He exemplified what it is to be a Mineola resident and cared about the community,” said Forestano. “I could always count on Lou for a news tip, a helping hand in navigating Mineola or a sounding board to bounce ideas off of. My thoughts and prayers are with his family. I will miss him.”

Even after retiring from Anton Media Group in 2013 at age 90, Lou’s famous “Around Town with Lou” column remained a popular feature of the paper, highlighting the residents, businesses and goings-on of the village. Angela Anton, editor and publisher at Anton Media Group, noted that Lou played a crucial role in covering and establishing Anton’s home base.

“It was such a pleasure working with Lou Sanders for all those years. Lou and his family were an integral part of the Anton family and we will never forget his heart, compassion and unending enthusiasm for journalism,” said Angela Anton. “He will always be the living embodiment of what it means to be from Mineola.”

But Lou’s influence on the Mineola community went well beyond the Mineola American. He was instrumental in founding the Mineola Chamber of Commerce, an organization he helmed as president five times.

Lou was the man that introduced Steve Ford’s father to the Chamber of Commerce. That devotion was passed down to Ford, who is now the vice president of the Chamber.

“Lou loved his community and wanted to see it flourish. Lou was a strong supporter of ‘Shop Mineola,’ [understanding that] a strong business environment leads to a vibrant healthy community,” said Ford. “Lou and Grace were always there for every event the Chamber did as well as many other organizations in town.”

Jack Martins, former Mineola mayor and state senator, said Lou was always the link between the residential community and the government. Not only was he involved in various initiatives, but Lou also introduced the mayors’ yearly state of the village and hosted debates during election season.

“Lou was one of those giants in the community around which Mineola was built,” said Martins. “He was a person who always had the community first. He certainly changed the fabric of Mineola for the positive and is someone who is irreplaceable.”

Lou served on the Mineola Village Pool Board for 45 years, and was twice elected president of the Nassau County Press Association. That’s all in addition to being a member of the VFW, American Legion and Knights of Columbus. His commitment to the community was memorialized with numerous awards and honors, including a 2015 spot on the John S. DaVanzo Wall of Honor, the first inductee to earn the recognition.

“He’s one of the icons of the village and one of the founders of modern Mineola,” said Mayor Scott Strauss. “He helped the village prosper and stayed with the village all of these years, and remained with his finger on the pulse of the community. He was a great friend to everybody.”

And despite all the other engagements taking up a spot on his calendar, Lou remained first and foremost a devoted family man. In its early days, the Mineola American ran out of the Sanders’ home, leading to an unusual, but enjoyable household for the children, as people would always stop by with news articles and advertisements.

“I always remember the house being a hub of activity with friends coming over,” said Lou’s son Tom. “It was always a very busy and fun house.”

His children remember him as a man of integrity and kindness, describing him as a supportive and involved father who nurtured his children’s talents. Son Richard described him as driven, and when he put his mind to something, he got it done, whether it was selling ads for the Mineola American or teaching himself Spanish so he could better connect to Long Island’s growing Hispanic population.

“He was really one of those members of that greatest generation,” added Tom. “He will be missed by his family and community. He was a wonderful dad and a wonderful man.”
Lou is predeceased by his wife Grace, who passed away in August 2016 and leaves behind two sons, Richard [Laurie] and Thomas [Deborah]; a daughter, Sister Annmarie, IHM; and three granddaughters, Tracey, Kimberly and Colleen.