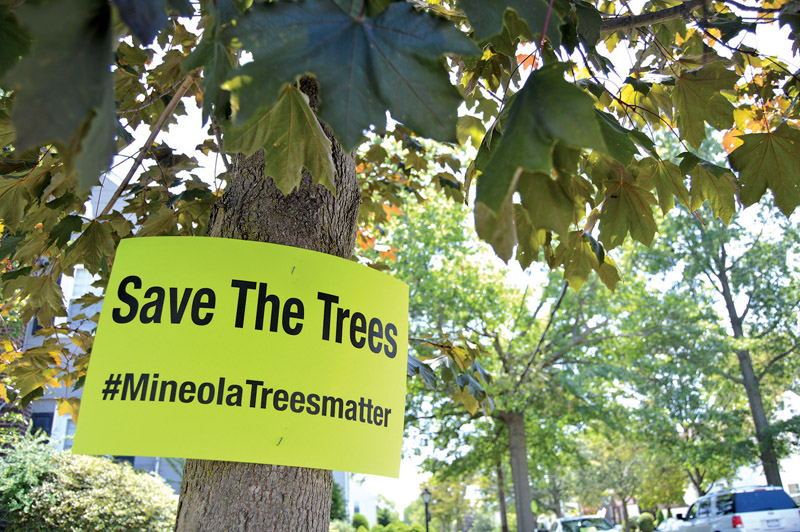 “This week the Mineola Department of Public Works began preparations for our long awaited road rehabilitation of Foch Boulevard and surrounding streets,” stated a letter recently put forth by the Village of Mineola, signed by Mayor Scott Strauss. “This initial work has stirred a lot of rumors regarding the roadwork plans and related tree removal.”

The letter, detailing the effects of the necessary roadwork affecting Foch Boulevard, Concord Avenue, Gilmore Street and Houston Avenue, was posted to the Village of Mineola’s website on Thursday, July 20, after widespread tree removal had already begun.

“Repaving roads and dealing with sewers and gas and electric lines, I understand those are all things that need to be done and need to be done in a safe way,” said Cathryn Mezzo, an 18-year Mineola resident who lives on Foch Boulevard. “I just feel that the community wasn’t involved enough, there was no pre-discussion or notice or warning. All of the sudden these big, beautiful trees just started disappearing.”

Mezzo is just one of several area residents who are both shocked and disappointed in the village’s method of handling the matter. Despite Strauss’s claim that letters were sent to those with homes on the affected streets, Mezzo and fellow neighbors are certain that they did not receive anything before the public works department began cutting the oak trees, many of which are decades old.

In response to the unwarranted tree removal, residents took to the streets on Thursday, July 20, at approximately 8 p.m., bearing signs that read “Save The Trees,” and “Don’t Foch With Our Trees.”

Some chanted, while others distributed signs, placing them on cars, front doors and the freshly cut tree stumps. Children stood on the stumps while reading Dr. Seuss’s The Lorax and hung their personal artwork around the community. Some depicted trees with sad faces, while others simply said “#treelivesmatter.”

Just a day later, Village of Mineola Department of Public Works vehicles could be seen continuing the tree removal process as concerned locals watched from a distance.

“Any questions you have, you’re going to have to take that up with the village,” said one anonymous public works employee on Friday, July 21, at approximately 1 p.m. to a Mineola American reporter. “And please don’t take any pictures.” The trees affected were those on Marcellus Avenue between Buchanan Avenue and Wilson Boulevard.

The village’s letter attempted to debunk certain myths that have begun circulating among residents, asserting that property values will not decrease, trees will be replanted to keep the streets of Mineola beautiful and that the public works department is doing everything in its power to avoid cutting down live trees, though it is necessary in certain situations.

“Because of the size of some trees in this neighborhood, especially large oak trees that have raised root structures which have undermined the roadway, some of these trees will need to be removed,” read the letter. “Not doing so would either impede roadwork, or create unsafe trees with weakened root structures. This could result in trees that pose a high risk of falling over and damaging nearby property or even causing personal injury.”

But residents aren’t satisfied. Many have already begun calling the mayor, pressing for answers, while others have joined together, vowing to attend future public hearings to voice their concerns. It is expected that cutting will continue as scheduled until further notice.

As of presstime, the mayor could not be reached for comment.