Some say revenge is sweet, but for Maria Ammann, it’s bubbly as well. The Williston Park resident turned a hobby into a business after losing her job, and now, the entrepreneur is selling her handmade soaps online and at Clark Botanic Gardens.

For Ammann, getting into the soap business was born out of necessity. She began making soaps in 2003, when her youngest son was diagnosed with a skin condition, called keratosis pilaris, also known as “bumpy skin.” Preferring holistic methods over medicine, Ammann took to the Internet to see if there were alternative treatments to prescription creams. She started researching and found out the chemicals in the baby soap she used on her other two children were wrecking her youngest son’s sensitive skin.

“I found out he needed real soap. Now you can find more natural products, but back then, nothing was made the natural way,” she said.

She decided to make soap herself, a chemical process that involves the use of lye. She saw the benefit the switch had on her family and fell in love with the soapmaking process, a practice she describes as similar to baking.

“I love the whole process. I’ve always loved making something out of nothing,” said Ammann. “I always loved baking because people loved what I made. In turn, I turned my love for that into making soap. It’s very similar because all the ingredients have to be precise.” 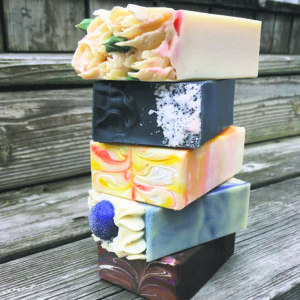 While at first she kept her circle of soap recipients to family and friends, in 2010 she took her hobby to the next level after her department was cut and she lost her job.

“That’s when I said this is the time to do something for myself, and to take my soapmaking seriously and start selling,” Ammann said.

Starting her own business, was, as she describes it, her sweet revenge, hence the name of her company, Sweet Revenge Soapery. Ammann started an online shop on Etsy, a popular e-commerce site focused on handmade items, and began selling her products at craft fairs.

While she enjoys making beautifully-shaped soaps, in the semblance of cupcakes, hearts or sunflowers, she said that customers often don’t want to buy “pretty looking soaps” because they feel like they’re too lovely to use. More often, she opts for using interesting colors and scents, with her best sellers including oatmeal milk and honey, wild flower honey and lavender oatmeal.

Another top seller is her men’s shave soap, including the unique beer shave soap. Ammann says that incorporating beer in soaps has numerous benefits, with hops and malt in beer providing skin softening amino acids and B vitamins helping to moisturize.

Ammann makes her soaps cold pressed in her Williston Park home studio. While making the soap itself only takes about two hours, plus 24 hours of saponification in a mold, curing it so it hardens takes anywhere from four to six weeks. She tries to keep her soap as natural as possible and avoids using preservatives, chemicals, parabens, phthalates and sulfates.

In addition to single bars, Ammann makes a lot of soaps for wedding and shower favors. 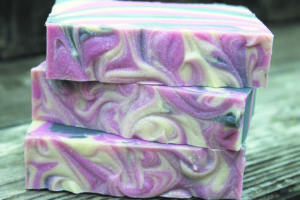 “People are looking for something different. You can really make something very personal for somebody,” said Ammann. “You become a part of their special day, which I think is so cool.”
Making soap can be time-consuming and though it’s a competitive business, Ammann said she loves that it allows her to be creative.

“It’s a labor of love. I’ve always been a creative person so I needed that creative outlet,” she said. “I love giving people a piece of me.”