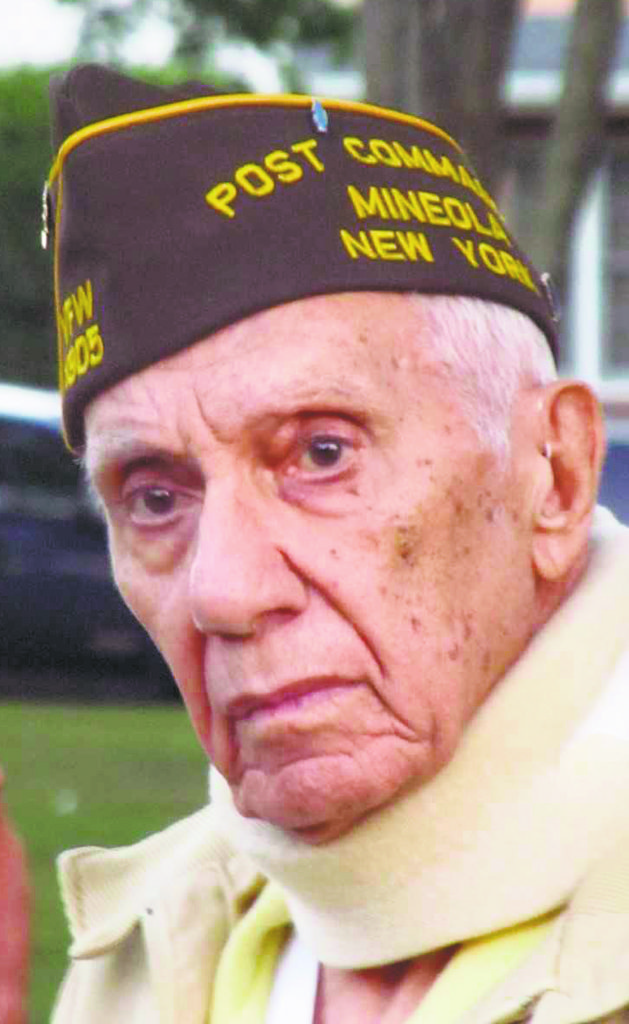 D-Day veteran Thomas Scardino, a longtime Mineola resident, died in the VA Hospital in Northport on June 7, virtually 73 years to the day when he landed on Utah Beach as a U.S. Army infantryman in one of the first waves in the Allied assault on the Nazi fortified French coast on June 6, 1944. He was 92.

A member of the 90th Infantry Division, known as the “Tough Hombres,” Scardino was awarded two Purple Hearts—belatedly in 2008—for wounds he sustained soon after the June 6 landings.

In recent years, his service continued when he became commander of Adolph Block VFW Post 1305 in Mineola in 2012, a position he held until he died.

In an interview with a local newspaper when he was elected post commander, he said he joined the VFW in 2009 after discovering a fellow veteran from the 90th Infrantry Division, Ray Vaz, was one of his neighbors in Mineola and a member of the VFW Post.

When the two men met, they realized they had landed on Utah Beach in successive waves on D-Day. They became fast friends. “It was like finding a brother,” Scardino recalled.“I think he’s one of the nicest guys I’ve ever met in my life,” Vaz said after learning of Scardino’s death.

Vaz was also awarded two Purple Hearts. Like Scardino, he received his medals decades after sustaining his wounds after 11 months in combat with Gen. George Patton’s Third Army.

Former Congresswoman Carolyn McCarthy facilitated receipt of the awards for both men. Scardino was also awarded a Bronze Star.

Scardino was wounded one month after D-Day, struck by machine gun fire in the right arm and hand. He was taken to a farmhouse that was being used as a medical aid station for treatment. Several hours later, the farmhouse was destroyed in a German counterattack and he was hit by shrapnel in his right thigh and elbow.

Decades later, he vividly remembered that experience and the chaos of the Utah Beach landings.

“I still see it today,” he told a reporter in the 2012 interview. “It was like a Chicago slaughterhouse, heads, blood in the water. What a waste. All you did was follow the guy in front of you, as long as he didn’t hit a mine.”

In 2015, Scardino and Vaz were inducted into the New York State Senate Veterans Hall of Fame after former State Sen. Jack Martins nominated them for the honor.

“Tom Scardino was a true American hero. He was a great friend to all. He will be missed,” Martins said last week.

On Dec. 7, 2016, the anniversary of the Pearl Harbor attack, Scardino and Vaz were honored for their service, along with fellow World War II veteran Anthony Catalano, a member of Albertson VFW Post 53, by the Mineola Board of Trustees.

“Our village lost a hero. Tom was a friend to us all,” said Mineola Mayor Scott Strauss. “His stories and jokes and quick wit were some of the hallmarks of this caring, strong and dedicated family man. To say he will be missed is an understatement.”

When Scardino came to the U.S. after recuperating from his wounds in England, he spent time in rehabilitation at a bowling alley in Norfolk, Va. He spent endless hours throwing baleens—target balls used in bocce—and then regular bowling balls to strengthen his right arm.

He became adept at throwing strikes and eventually, between 1963 and 1967, he competed on the Professional Bowling Association tour, while he maintained his primary career in the garment industry.

After his rehabilitation in Virginia, Scardino spent the rest of the war working at a desk job in Maryland where he met Frederick Ioli, who introduced him to Ioli’s sister, Flora, who would become his wife.

They lived in Mineola since 1975, and were married for 71 years.

Visitation will be at Weigand’s Funeral Home in Williston Park on Thursday, June 15, from 2 to 4 p.m. and 7 to 9 p.m. A funeral service will be held there at 8 p.m. The burial will be at the Long Island National Cemetery in Pinelawn on Friday, June 16.