For a third consecutive year, the village budget projected no increase in taxes over the previous year’s budget. Appropriations to be raised by real estate tax levy will be $13,348,895.

Other total estimated revenues will be $6,729,957. That total includes $282,230 in state aid, a nearly $2,000 decrease in state aid from the 2016-17 village budget. It also includes $425,000 in payments in lieu of taxes—or PILOTs—and incentive bonus payments from the new Modera apartment building on Old Country Road.

The village board voted unanimously in favor of the proposed budget. Deputy Mayor Paul Pereira was absent from the meeting.

“We, the board, have continued to do smart budgeting,” said Mineola Mayor Scott Strauss, noting the absence of any tax increase to residents. “The Village of Mineola is on financial footing that is rock solid and we plan to keep it that way.”

“As a taxpayer, I find no fault with a budget that, for the third year in a row, is flat,” said village trustee Paul Cusato, referring to the absence of a tax increase.

Walsh estimated that the tax rate for village residents has risen one half of one percent over the past four years. 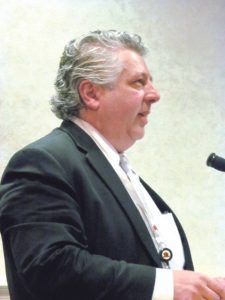 Strauss said his administration is continuing the work begun by former Mayor Jack Martins, Strauss’s predecessor, who inherited $46 million debt when he took office years ago.

“The fact that we went from $46 million in debt to $10 million debt didn’t happen easily,” said trustee Dennis Walsh.

Prior to approving the village budget at last week’s meeting, the board also unanimously approved $533,000 in community development funding appropriations from the federal Department of Housing and Urban Development (HUD). In a brief public hearing, consultant Thomas Savino proposed HUD appropriations of $250,000 form commercial rehabilitation, $233,000 for streetscape improvements and $50,000 for removal of architectural barriers to create accessibility ramps for the disabled.

“This is a project that, if we can keep it going, is literally changing the face of Mineola,” Strauss said.

He said four storefronts on Mineola Boulevard that have undergone makeovers from funds previously secured from HUD for commercial rehabilitation look “absolutely beautiful.”
Savino, consultant to the board on the community development funding, told the trustees there are some “outstanding expenditures that we have to move fast on.”

After the brief hearing and vote on the community development funding, Savino explained that the village is in the process of spending $300,000 on commercial rehabilitation from a prior HUD grant and must spend a certain portion of that money by June. 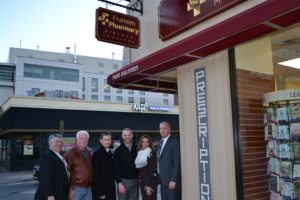 He said six storefronts have been upgraded thus far with those funds, with 20 more makeovers to be funded with the monies already in hand. The makeovers include façade improvements, new signage, awnings and brickwork.

Savino said 60 local business owners were interested in participating in the program. He said the idea is to provide business districts throughout the village, along Mineola Boulevard, Jericho Turnpike and Willis Avenue, with a uniform look.

Under terms of the grant funding, he said store owners are responsible for 25 percent of the cost of the makeovers and can receive up to $15,000 in grants for signs and lighting as well as $30,000 for facades. He said the program also enables the village to bring storefronts up to code if signage is not consistent with local ordinances.

Savino said he receives $75,000 per year from the village for his consulting services.

Jonathan Martin, an architectural designer who teaches at Columbia University and the Pratt Institute, has been retained to do the renderings for each makeover.

A five-member committee of local residents, along with Mayor Strauss and Village Clerk Joseph Scalero review the plans before work begins.

“It’ll take years. This could be a $3 million project once it’s done. It’s like a snowball rolling down a hill,” he said.