Don’t miss the Wheatley Theatre Company’s production of Xanadu on Thursday, Friday and Saturday, March 23 to 25, at 7 p.m., or catch the Saturday matinée at 2 p.m.

“Xanadu is a hilarious rollerskating musical adventure about following your dreams despite the limitations others set for you,” said Andrew Ardito, Wheatley social studies teacher and the production’s director. “The show contains numerous hit songs by Olivia Newton-John, Electric Light Orchestra and Gene Kelly that will keep audiences singing and dancing along.”

The school’s spring show is based on the 1980 romantic musical fantasy film that starred Newton-John, Michael Beck and Kelly. 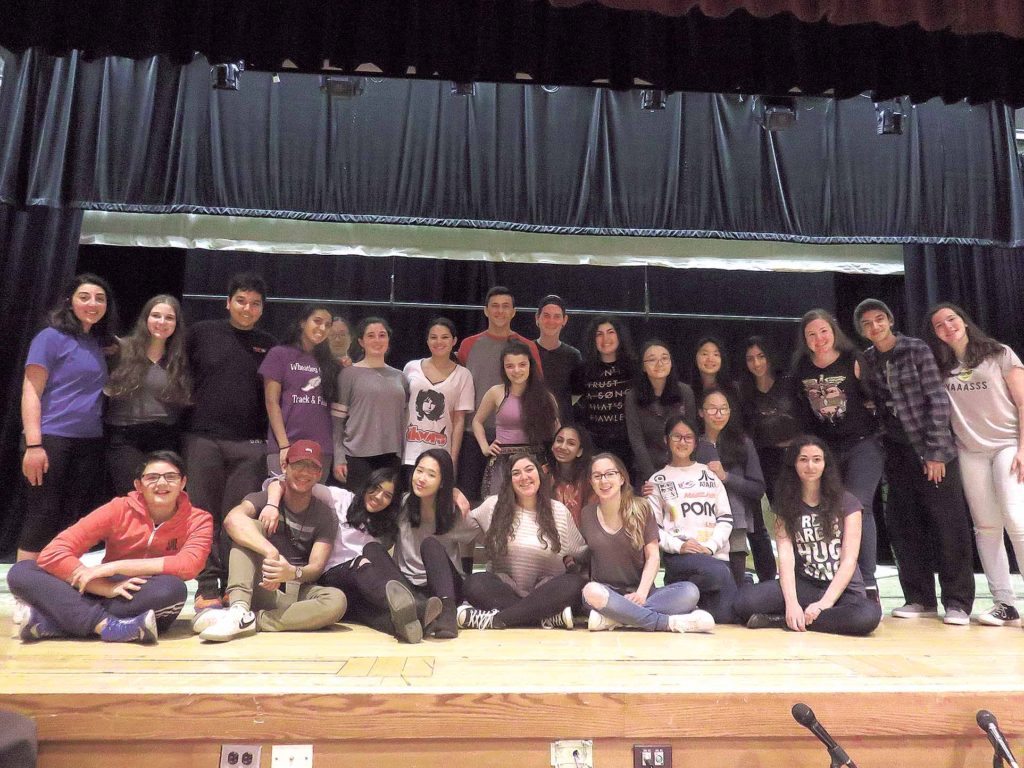 “This musical comedy showcases Wheatley’s most talented singers and dancers with one magical song after another,” noted Ardito. “Audiences will be transported back to the world of 1980—the era of roller discos, pop songs and innocent romance.”

The cast is comprised of longtime Wheatley Theatre Company members as well as some newcomers.

“I play Sonny Malone and although he’s not the sharpest tool in the shed, he is so fun to play,” said male lead Antonio Liparoto, who portrays a struggling artist whose dream is to open a roller disco. “This is my first show, and it has been an unforgettable experience. I have made new friends and have received so much support from them, as well as from Mr. Ardito and Mrs. Luftig [the musical director]. Xanadu has been so much fun and is really a great show that knows just how to please the audience.”

The story follows a group of sisters portraying Greek Muses, each with her own unique specialty, who has the job of inspiring an artist, though she is forbidden from creating art herself or loving a mortal. The leader of the Muses is supposed to be the oldest sister, Melpomene. But, the Muses’ father, Zeus, instead grants the leadership role to Clio, the Muse of History. The slighted oldest sister, Melpomene, decides to get her revenge by casting a forbidden love spell on Clio and Sonny Malone, which leads to the humor and heart wrenching twists and turns throughout the play.

“Out of the five musicals I’ve been in during my time at Wheatley, Xanadu is my favorite,” said Lianna Golden who plays Melpomene. “The number of laughs we have had during rehearsals is uncountable. This show is such a fun one, for it’s got comedy, love and, of course, tragedy. Working with some of my best friends as cast mates is always a blast. Xanadu will make you chuckle, smile and probably cringe at moments.”

The director summarized the musical’s powerful message. “In the closing scene of the show, Clio, the Muse of History, declares to her father, Zeus, that she will use the popular art form of each era to ‘remind mankind that there is something greater than wealth or fame, and that is the human experience rendered comprehensible through art,’” explained Ardito. “This line really captures the essence of this show. Throughout the hilarious story, we are reminded of how important it is to dream, to love someone else and to create art. That is Xanadu.”

Presale and online tickets at http://wheatleytheater.weebly.com cost $10, tickets at the door cost $12 and senior citizens are free in The Wheatley School auditorium, located at 11 Bacon Rd. in Old Westbury.