Residents looking to take a trip down memory lane can now do so with a bit more ease and have a very unusual group to thank for that luxury: inmates in Oklahoma correctional facilities.

The Mineola Memorial Library recently partnered up with a group called the Oklahoma Correctional Industries (OCI) Yearbook Project, which has inmates in Oklahoma correctional facilities digitize old high school yearbooks. The inmates scan the yearbooks and then return them along with the DVDs containing the scanned images, all at no cost to the library.

According to an email sent to libraries across the country, the project started after Oklahoma state agency OCI learned that high schools and libraries throughout the state were losing their yearbooks because of natural disasters, or because people would cut pictures out of them.

When Cathy Sagevick, assistant director at the Mineola Memorial Library, received the email about the free service being offered to digitize yearbooks, she knew it sounded like a good deal. She reached out to the Mineola Historical Society, which had a larger collection of yearbooks than was available at the library. By combining their collection with the historical society’s, the library was able to have yearbooks from 1925-27 and 1941-2016 digitized (the library and historical society didn’t have yearbooks from 1928-1940).

“It seemed too good a deal to pass up,” said Sagevick. “Preserving them digitally means patrons who come to look through the books won’t get their fingerprints on them and the yearbooks will never deteriorate. It’s preserved forevermore.” 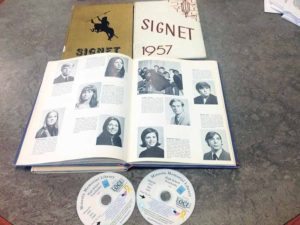 While Sagevick initially had a concern about information from yearbooks being collected and used for nefarious purposes, representatives from OCI assured her all the scanning was done in a controlled environment and no information would be copied.

The library sent out the yearbooks in November and received them along with the DVDs back in February. Sagevick is still working out the process of how patrons will view the digitized version, saying most likely, patrons will be able to borrow the DVD of the year they want and view it on a laptop at the library.

Sagevick noted she was very pleased with the digital version of the yearbooks and OCI recently contacted her about their microfilm digitization services. She said the library is also considering digitizing the Mineola American, which they have on microfilm from 1955 to 2002.

“As it happened, our microfilm reader machine just broke and it’s going to cost $1,000 to fix,” Sagevick said. “OCI sent us a notice that they can digitize it and for [several] hundred dollars they can scan all that microfilm and make it searchable. So if we wanted an obituary from 1960, you can put in a name and come up with some reference.”