A bias incident in Mineola that, according to Nassau County Police Department Lieutenant Richard Lebrun, approaches hate-crime levels is currently being investigated by the Third Precinct. Residents discovered a red swastika spray-painted onto a Washington Avenue sidewalk on Saturday, Nov. 30, at 6:30 a.m., with the message “Make America White Again” spray-painted in black graffiti.

Lebrun added that police also found messages that featured “other disparaging and derogatory remarks against African Americans and those of Middle Eastern decent.”

“This behavior is that of a misguided individual. It is unacceptable to residents and to police of Nassau County,” Lebrun said, before adding that the spray painted message amounted to a hate crime. “It does, it does. We don’t know if it was against a certain group or pro [a certain] group. We don’t know who actually did it right now.”

Police said the graffiti incident took place between 11 p.m. on Tuesday, Nov. 29, and 6 a.m. on Wednesday, Nov. 30, and that two more swastikas with similar messages were found on Elm Street, apparently also from that night. Lebrun noted that there are similarities between the two incidents, including the color of the spray paint and the content of the messages, but said that police are still uncertain as to whether the same culprit is responsible. He also explained that the incidents weren’t made public immediately because police were still in the process of investigating.

“We’re not hiding anything,” Lebrun said firmly. “What we want to do is make sure the squad has the appropriate time to conduct the proper investigation before we actually release it.” 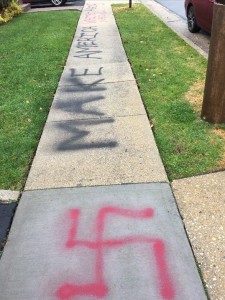 According to Lebrun, Nassau County has had 48 bias incidents since January, 33 of which involved graffiti. Also revealed was the fact that three recent graffiti incidents in Garden City featured anti-White messages. While some have expressed concerns about possible reactions to Donald Trump’s election from both sides, Lebrun made clear that hate crimes are a concern under any circumstance.

“To the person who spray-painted swastikas and ‘Make America White Again’ on a sidewalk in Mineola: You are not clever, you are not tough. You are a coward. If you have something you want to say, then come forward, turn yourself in to the police, and show your family, your friends, and your neighbors who you are,” Rice said in the statement. “I won’t hold my breath waiting for President-Elect Trump to condemn people using his campaign slogan to intimidate people of color. It’s up to every one of us to call out this kind of language and behavior wherever we encounter it, and it’s up to every one of us to show that we are grateful to live in such a diverse district, state and country.”

Police have requested that anyone with information on the incidents call Nassau Crime Stoppers at 1-800-244-8477.