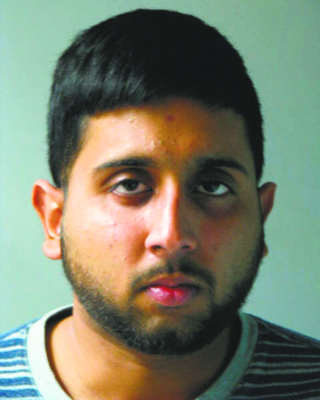 A Nassau Community College (NCC) student from Plainview was arrested Dec. 20 in connection with bias graffiti found on campus over the past several months.

According to authorities, Jasskirat Siani, 20, of Central Park Road in Plainview, was arrested and charged with 10 counts of felony aggravated harassment after an investigation found he tagged the exterior wall of the college’s Building H with two swastikas and the floor of F Building Cluster 225 with “KKK.”

Each count is punishable by up to four years in jail.

The arrest comes after multiple reports of racist graffiti at NCC. The latest bias incident occurred at the college on Dec. 9 when a student notified security that he discovered multiple swastikas along with the words “Germany” and “Heil Hitler,” drawn with a black marker inside the E cluster Buildings first floor men’s bathroom. That incident came two days after a security officer discovered three swastikas drawn on the B cluster building stair handrail and on the wall. The swastikas were approximately eight-inches long and drawn in black ink.

Police said three other bias incidents occurred at the college in the month of October. Three swastikas were drawn in green marker inside the E cluster building second floor men’s bathroom on Oct. 15. On Oct. 28, the NCC cleaning staff discovered two swastikas and an anti-Semitic comment on the wall of the men’s bathroom in the D cluster building. The other incident occurred on Oct. 29 when security discovered multiple swastikas drawn in blue marker on the walls and urinals of both men’s rooms on the first and second floor of the E building.

NCC President Hubert Keen said the student has confessed to drawing all of the swastikas and other bias graffiti throughout the campus.

“We are deeply saddened that the alleged perpetrator is a student and it reminds us that a zero tolerance policy and a rigorous program of on-campus anti-bias programs must be reaffirmed every day,” he said. “We will use this unfortunate series of events as an object lesson for our students, faculty and staff in the days and weeks ahead. We are grateful to the Nassau County Police Department for their good police work.”

—With additional reporting by Christina Claus