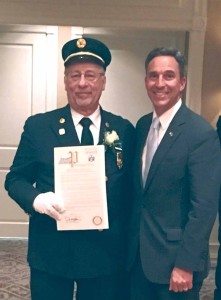 Sellitto joined the department in July 1966 as a member of Company No. 1, following in his father’s footsteps. Throughout his 50 years of service he has served in numerous leadership capacities, including Chief of the Department. Sellitto has been repeatedly recognized for excellence, being named the Town of North Hempstead’s Firefighter of the Year in 2001 and Company No. 1’s Firefighter of the Year in 2007.

Martins presented ex-Chief Sellitto with a proclamation from the New York State Senate in recognition and appreciation of his 50 years of devoted community service.

—Submitted by the Office of Sen. Jack Martins