In a previous article, I described several historical points of interest in the village which can still be viewed in their entirety or in part. One landmark that has unfortunately disappeared without a trace is the Mineola Movie Theatre. Built in 1926, it dominated the southeast corner of Mineola Boulevard and First Street for half a century. Unlike the multi-chambered theatres of today, this theatre had one room and one screen. There was a new showing every Sunday, Wednesday and Thursday. The Wednesday features were geared toward a young audience. Such a schedule made it fairly easy to keep up with the first-run films of the day. If our preferred movie was not showing at Mineola, we could possibly see it at the Calderone Theatre on North Franklin Street in Hempstead; however, this extra trip was rarely necessary. 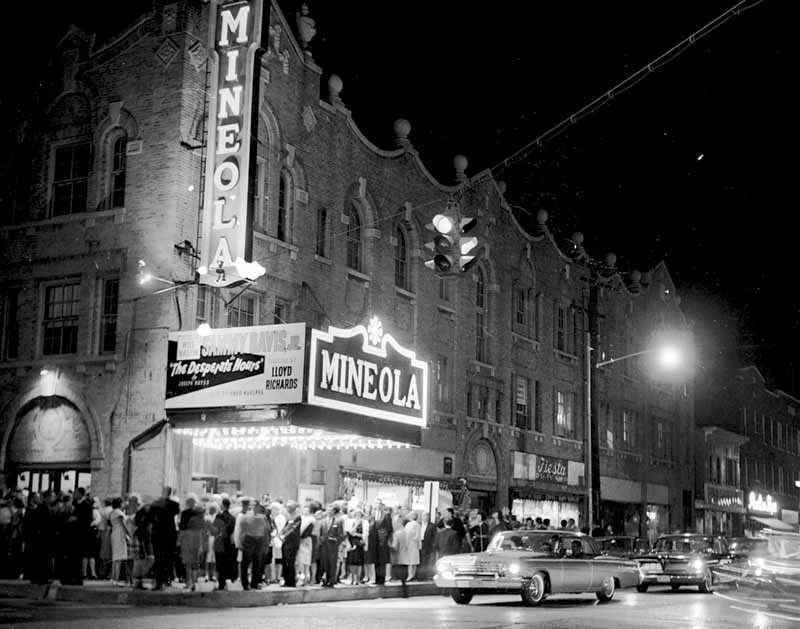 Although the formal, main entrance was on Mineola Boulevard, the first doors to be opened were the ones facing First Street. If a popular film was showing on a weekend or during school vacations, it would not be unusual for a line to stretch all the way to Main Street before the 1 p.m. opening. Admission for those under age 12 would set us back a quarter. During the summer, the cool, yet smoky interior of the theatre was a welcome treat; the hazards of second-hand smoke were yet to be understood. The refreshment counter was located at the far end of the lobby. Popcorn was not available in the industrial-scale containers we see today, but in one, sensibly-sized cup priced at 10 cents.

As we settled down and enjoyed our popcorn, uniformed ushers would patrol the aisles in an attempt to maintain some semblance of order in a room filled with hundreds of youngsters. By this time, all eyes were directed toward the left side of the room. There on the wall was a clock with an eerie, lavender glow. For reasons I never quite understood, the clock seemed to be framed with a small automotive tire. At the exact scheduled time, the house lights would dim and, for a few seconds the projector cast a somewhat wrinkled image upon the closed curtains, which would then dramatically part, and the show would begin. 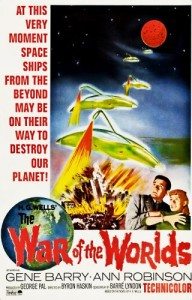 In those days, long before CNN, movie shows always started with a newsreel. The presentation began with the image of a movie camera slowly turning to face the audience, and rapidly zooming toward our faces. This was followed by a five-minute review of the previous week’s events. The black-and-white film usually had no audio except for that of a narrator. The newsreel was followed by a series of previews, such as we see in theatres today.

Next came about a half-dozen cartoons. I had always been an avid fan of Donald Duck comic books and would imagine a somewhat human sound to his voice as I read. Picture the shock I experienced when I could hardly comprehend the dialogue as Donald and his nephews spoke like…ducks.

After the cartoons, we settled down for several hours of entertainment. One auditorium did not mean one film; double features were the rule. Although the so-called “B” movie was usually in black-and-white and not always outstanding, I do recall in 1953 seeing Stalag 17 and War of the Worlds in the same day—a pretty good lineup for one afternoon.

After the show, it was time to summon whichever fortunate adult was designated to pick up the youth of the entire neighborhood. Nestled in the corner of the building, just beyond the refreshment stand was the theatre’s only public phone booth. The instrument within looked like a prop from The Waltons and must have been the original equipment installed in the building. The mouthpiece was actually an integral part of the wall phone and only the conical earpiece was connected to the end of the wire (no, it did not have a crank). An operator-assisted local call cost five cents. Do you

During its final years, the theatre replaced movies with live entertainment. My parents attended several Broadway-type shows and I recall seeing performances by jazz great, Maynard Ferguson and (from the second row) sitarist Ravi Shankar. This policy postponed, but did not prevent, the ultimate arrival of the wrecking ball.

Although the building is long gone, it left behind fond memories of all those Gene Autry, horror, sci-fi, Abbot and Costello, Disney and war films released during that wonderful era.