For more than six decades, the Mineola American has been the voice of Mineola, covering the news, events and people important to local residents. The 64-year-old paper is built on a strong foundation, laid by community pillars Lou and Grace Sanders. When Grace passed away on Friday, Aug. 19, at the age of 90, Mineola lost more than a beloved resident; it lost a dedicated community member who left an indelible mark on Mineola life.

If Lou was the face of the paper, Grace was the backbone, serving as the Mineola American’s business manager for 40 years as well as proofreading copy. It was a job she did every day with quiet steadfastness.

“My mother had this routine down,” said Richard Sanders. “She would make breakfast, do her housework, make lunch and then do the business management for the next four hours. Then she would make dinner and edit my father’s copy. That was every day.”

One of Annmarie Sanders’ fondest memories is her mom sitting at the dinette, big ledger books surrounding her. Helping to run the paper was hard work as everything had to be done by hand, but Grace did it gladly out of her love for Lou.

“She did it all out of love for my dad. It meant so much to him, and she wanted to support him in it and make it the best it could be,” Annmarie said, adding that Grace was always there for Lou, both with the paper and in everyday life. “She never needed to be the star. She was very content being at his side and letting him shine.”

During the ’60s, the Village of Mineola temporarily pulled its legal notices from the paper due to disagreements regarding Lou’s editorials. Legals made up a third of the paper’s revenue and though it significantly hurt the business and family financially, Lou and Grace never backed down.

“It came up at the dinner table every night, but my mom never asked him to back down,” said Richard. “I’ll always remember the way they both stuck to their guns because it was a matter of principle, no matter how much it cost them.”

Lou and Grace balanced each other out perfectly, said Annmarie. While Lou was a big picture thinker, Grace focused more on the practical side of things. She kept detailed records and when the paper was sold to Karl Anton in 1992, one of the deciding factors was the high quality of the books.

“Without her there would be no Mineola American,” said Lou. “In the early days, I was almost ready to give up. But Grace was always there to back me up. There were plenty of days I was depressed, but she was there by my side. I could have never done anything without Grace.”

When she wasn’t running the behind the scenes operations for the paper, Grace was actively involved in the community. She served as secretary treasurer of the Mineola West End Civic Association in the ’50s and ’60s, as well as did volunteer work for the Corpus Christi hospitality committee and Mineola Chamber of Commerce.

A member of Corpus Christi Church, Grace was also a woman of deep religious faith. She and Lou enjoyed spending time with other parishioners and were active volunteers.

“The Catholic church played a major role in her life,” said her son, Tom Sanders. “Her faith and convictions were very strong.”

She was also a devoted mother to Richard, Tom and Annmarie, remembered by her children for her gentleness, accepting nature and sense of humor.

“She had this lovely sense of humor that was so gentle, and it helped give perspective on life even through the harder times,” Annmarie said. “She could always see the positive and never let the hard times drag her down. She had the capacity to laugh at the hard things and not to take everything overly seriously that didn’t need to be.”

“She always faced problems with a tremendous attitude,” said Tom. “She was always upbeat and looked forward to solving problems and moving ahead.”

But one of the most noteworthy things about Grace was her unwavering commitment to her husband of 68 years. They were lovebirds until the end, said Tom, holding hands any time they were together and completely devoted to one another.

“She was always there for me. I could always count on her,” said Lou. “I loved her with all my heart and she loved me. I never deserved anybody as good as her. She was the best wife in the whole world.” 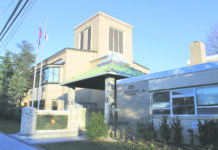 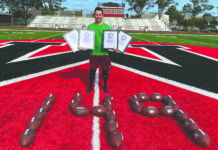 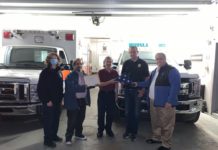 Students To Pay Tribute To Veterans With Field Of Honor