“Five months after this project was announced, we should have answers to very simple questions,” Martins said. 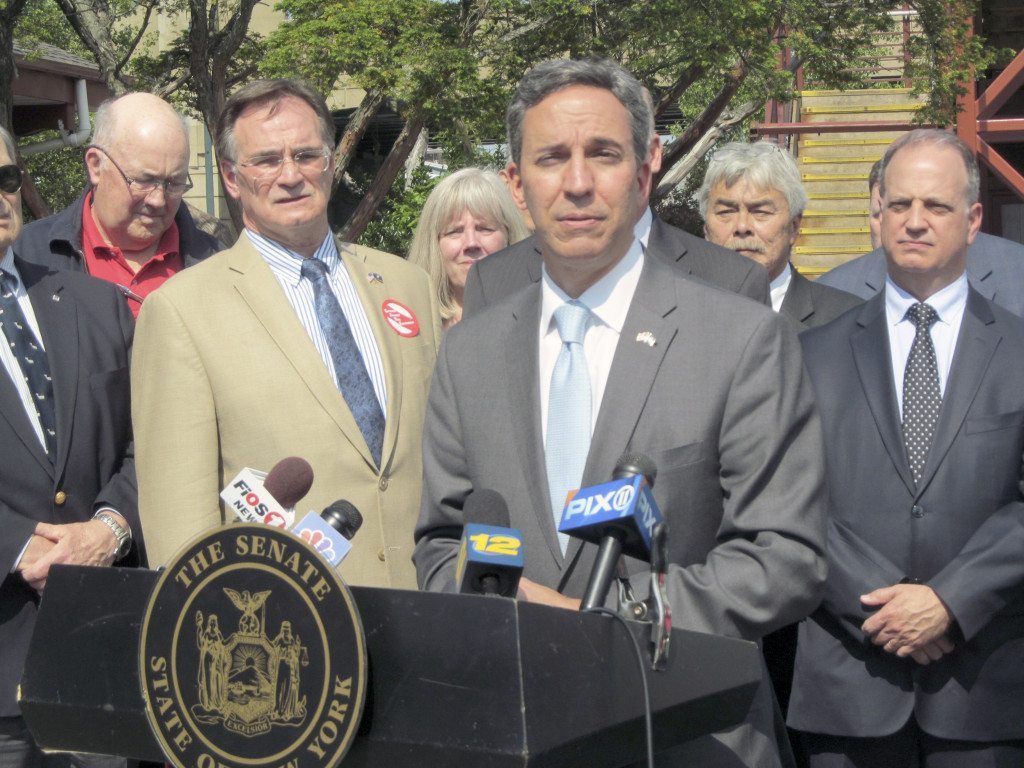 Speaking at a press conference in the Mineola LIRR station plaza on May 19, Martins said those questions include how long the $1.5 billion project to construct a third rail line between Floral Park and Hicksville will take and how it will be phased in.

He said officials from the eight municipalities with grade crossings to be eliminated in the first phase of the project have been unsuccessful in attempts to get answers from state officials and the LIRR on details about the proposed project to create a third railroad line between Floral Park and Hicksville.

Martins said details disclosed thus far indicate the third track would be on the north side of existing tracks at some stations and on the south side at other stations, zigzagging along the 9.8 mile corridor the third track will occupy.

Asked to comment on the three-year period the LIRR has projected to eliminate the grade crossings, Martins said, “I don’t think that’s realistic at all,” noting that the Herricks Road grade crossing took three years to construct after a multiple fatality accident prompted the work.

He also questioned Cuomo’s assertion that the project would entail “no takings” of property. He said the project will include “constant construction” along the entire main line once the project starts, likely prompting service disruptions.

He said residents of the communities who are being asked to comment this week on the environmental scoping document recently released by the LIRR need details of the entire project in order to ask questions.

Martins said a 90-day period for public comment should commence only after a comprehensive third track plan is released by the LIRR, which is the lead agency on the project.

Local officials also expressed their concerns about the lack of information that has been forthcoming. They said the scoping document only provides details about the projected three-year initial phase to eliminate seven grade crossings along the third track route.

“We’ve been asked to put a puzzle together without all the pieces. Give us the pieces,” said Mineola Mayor Scott Strauss. “We need all the information to digest it.”

Strauss said officials in the eight communities where grade crossings are to be revamped have been given “great detail” about alternative plans for that work. But he said a comprehensive plan which specifies the impact to residents and businesses has not been presented.

He said the narrow time frame for public comment should be extended and additional public hearings scheduled at times that are convenient for residents to attend. Four scoping sessions for public comment were planned for Tuesday and Wednesday this week, with sessions in New Hyde Park and Westbury slated during daytime hours.

“It gives no time for anybody to get organized. And I think that’s intentional,” said Garden City Mayor Nicholas Episcopia.

“This is a densely populated suburban area. We really need to understand the full impact this is going to have,” said New Hyde Park Deputy Mayor Lawrence Montreuil.
Recalling the last time the third track plan was proposed in 2008—and ultimately rejected and abandoned—Nassau County Legislator Richard Nicollelo said, “All of us were opposed to this, and here it is again.”

In response to comments at the press conference, Cuomo spokesperson Beth DeFalco issued a statement, saying, “Any project of this magnitude follows a process prescribed by law. Before a draft proposal is presented to the public, many things have to be studied. As part of that process, LIRR will conduct an environmental review and we are holding more public meetings than required to get input from surrounding communities about the things that should be studied.”