The case of Walter C. Schmidt illustrates why many veterans absolutely loathe the Department of Veterans Affairs.

Schmidt, 69, of Massapequa Park, the wheelchair-bound director of veterans services for the Town of Oyster Bay, spent three tours in Vietnam (1967-69) with the Navy as a “river rat” on gunboats, was exposed to Agent Orange, and now suffers from multiple sclerosis, a heart ailment and diabetes. He has only partial use of his right arm and hand. His speech is not impaired.The VA considers him only 50 percent disabled, not 70 percent—which would make him eligible for free care at the State Veterans Home in Stony Brook. As it is now, Schmidt would have to pay $9,000 a month for that care, which he cannot afford. The Veterans Health Alliance of Long Island, a consortium of more than 70 individuals and organizations that offer free health care for veterans, is helping Schmidt appeal.

Schmidt spoke at a March 15 Adelphi VHALI conference on the aging of America’s veterans but did not advocate for himself. He has been pressing his case for more than 14 years.
It is ironic that Schmidt, since 2004, has been counseling veterans and helping them obtain benefits after working as a CPA for three decades. His wife of 44 years, Esther, who was his primary caregiver, died of cancer this past January. He needs an aide to help him hoist himself out of bed and into his wheelchair.

“My argument is simple,” Schmidt said. “The VA has a rule that says I need a medical statement or a lay person statement to attest to the fact that I had probable onset of MS within seven years of my discharge from the military.” He provided such statements from himself and his wife but was not diagnosed by a doctor as having MS until much later.

VA officials do not comment on cases due to privacy laws. Asked about the difference between 50 percent and 70 percent disability, Dr. Richard Allman, the keynote speaker at the Adelphi conference, said, “The Veterans Benefit Administration decides on eligibility for various programs. At 70 percent or greater, if you need nursing home care, we are obligated to provide it.”

There are 890,000 military veterans in New York State, including 57,000 from World War II, 89,000 from the Korean War and 278,000 from the Vietnam era. Fifty percent of those veterans are 65 and over. There are 52,000 living in Nassau and 73,000 in Suffolk, so about 62,500 are 65 and over. Jamal Othman, deputy director if the state Division of Veterans’ Affairs, said “the veterans population is aging. They’re getting older and we have to shift to meet the needs of our veterans population.”

Allman said, “It’s a global phenomenon: our veterans are aging more rapidly that the rest of our population.” He said only nine million of the 22 million veterans nationwide are enrolled with the VA and 52 percent of them are over 65. He said between 2013 and 2023, the number of veterans 65 and over is expected to rise from 4.1 million to 4.7 million. He said during that span, the number of veterans needing nursing home care is expected to rise from 500,000 to a million.

“Nursing home care is very expensive,” Allman said. “There’s a tsunami of aging veterans.” He said the VA’s goal is to have veterans, even those with dementia, remain in their homes and use community based services for as long as possible.

Schmidt told Allman that many veterans do not think about enrolling in the VA system until they have a catastrophic injury or illness and then they can’t do so in person. VA officials have told Schmidt they can’t come to a veteran’s home unless he already is in the system. So it’s a Catch-22 situation. Allman said he would return to his Washington, D.C. office and “take it back to my operations colleagues” to see if caseworkers could be sent to a patient’s home to enroll the patient.

John Sperandeo, chief of social work and chaplain service at the Northport VA Medical Center, urged all veterans to enroll in the VA because they might need help down the road. He said that the VA will work with veterans discharged under less than honorable conditions to help them get upgrades to make them eligible for services.

Jim Smith, 67, of Williston Park, is the author of Heroes to the End, a Vietnam memoir available at www.heroestotheend.com, and board chairman of United Veterans Beacon House, a Bay Shore nonprofit that runs 34 homeless shelters for veterans on Long Island. 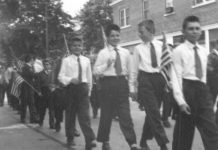 Column: The Other Death Watch