Ed Smith lives on in the memory of many Mineola residents for his tireless community service, political activism and willingness to always lend a helping hand. Now, his dedication to the Mineola community will live on tangibly with a plaque on the John S. DaVanzo Wall of Honor. 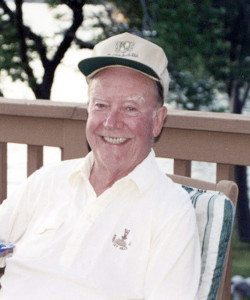 Established in 2015 by the village of Mineola and Chamber of Commerce, the John S. DaVanzo Wall of Honor award recognizes individuals who have dedicated themselves to enhancing the Mineola community. A committee, comprised of Chamber members Steve Ford and Gary Katz, Mineola trustees Paul Pereira and George Durham, as well as community resident, Richard O’Callaghan, chose Smith as the Wall of Honor award recipient this year because of his lifelong dedication to civic involvement.

“We were looking at people who have made a difference in the community and put forth an effort to make the community a better place,” Ford said. “Ed was not only mayor, but a village trustee, president of the Chamber, president of the Lions Club. He was involved in many different aspects of the village, that’s what led us to choosing him. He spread himself throughout the village.”

Nine nominees were submitted to the committee for a revered spot on the wall, some of them, including Smith, were nominated by multiple people. Lou Santosus served on the village board with Smith, and nominated him for the award because he was “always there for the residents and employees of the village because he loved Mineola.”

“Ed was always the force that brought the village board together. [He] was a good listener and knew how to get a job done and he was always willing to compromise,” said Santosus, who lauded Smith for being an advocate for the fire department. “He always maintained a calm demeanor at meetings and always was respectful to those who came to speak, even though sometimes they were not very respectful to him.”

Smith joins John S. DaVanzo, a community mainstay known as “Mr. Mineola,” and Lou Sanders, founder of the Mineola American and Chamber of Commerce, on the wall which will be placed in the lobby of Village Hall when it is remodeled.

Smith left a lasting mark on all aspects of Mineola. He spent a decade as Mineola’s deputy mayor, 10 years as mayor and 15 years as the village assessor. He then went on to serve as the vice chairman for the Town of North Hempstead’s Board of Zoning Appeals.

He was an active member of the Mineola Lions Club, which was renamed the Edward Smith Mineola Lions Club in his honor in 2000. He was a champion for the blind, helping to raise thousands of dollars for the visually impaired. Smith was also the past president of the Chamber of Commerce, helping revitalize the club. He was also involved with Corpus Christi and St. Aidan’s Church, the latter of which he was a member of. He was a proud and involved Republican, who reached across the aisle to help people like Tom DiNapoli build up their career.

“He was very public in politics. He knew all the Republicans, but also knew the Democrats like Tom DiNapoli. He helped him all the way,” said Smith’s son, Matthew. “He saw good people and tried to help them out.”

And his dedication to service went far beyond the reaches of the village. Smith served in World War II for three years, before spending two years in the Korean War. He founded real estate company Edward S. Smith & Co. in 1949, going on to establish Smith & DeGroat in Mineola six years later, which is currently run by Matthew.

Smith passed away in 2015 at the age of 92. Matthew said he’s proud of his dad, who was so committed to Mineola.

“He was consumed with trying to help Mineola,” Matthew said. “He was living, eating and breathing Mineola. It was a very important part of his life.”

Smith’s Wall of Honor plaque will be unveiled at either the June or September Chamber of Commerce meeting.