Mineola High School students are gearing up for their spring production of the Tony-award winning musical Pippin. The play, written by Mineola High School graduate Steven Schwartz, encompasses a young man on a journey to find the meaning of life.

The play’s director and Mineola Middle School fifth-grade teacher Matt DeLuca said that deciding what musical selection the students would perform was an interesting process.“In Mineola we’ve got great theatre kids, but they’re not theatre geeks,” said DeLuca. “They’re well-rounded, multifaceted, many interests kinds of kids…I came across Pippin and it was the perfect show to showcase this particular group of kids. That’s what makes it such a joy. Once they learned the show, once they started reading it and listening to it they took to it. They are treating it with such respect and love.”

Between hours of vocal training, learning routine dance numbers, setting up backdrops for the stage and perfecting lighting for the show, the students have been keeping themselves very busy in preparation. Student Jake Siegfried, who is playing the lead character of Pippin, said that there is great deal of support among the school’s community.

“It’s a lot of fun to put on all these different numbers because everyone gets really close and we all have fun doing it while we’re performing in front of all these people,” said Siegfried. “It’s like one big, happy family. I hope everyone who hears about it gets to come out and see it.”

Even faculty members are involved in preparation for the show. Assistant director and English teacher Drew Smith said that he has always loved theatre but never got involved with it before working at Mineola High School.

“It has been one of the most rewarding experiences in terms of my 31 years of teaching,” said Smith. “Being in this room, you know you’re in a special place. You’re a part of this family. It’s such a welcoming place and it really is a niche for these kids.”

Smith said that many parents may be concerned about the suggestive content included in the play, but they shouldn’t worry.

“I really think it’s tastefully done and it’s funny. His [Pippin’s] experience with war is supposed to be funny. It’s not the thing people make it out to be,” said Smith.

DeLuca also notes that although they are staying true to the script, most of the suggestive scenes will be done in silhouette.

“It’s a young man’s journey to see who he’s going to be as a man. Without all the parts it doesn’t make any sense,” said DeLuca. “The boy playing Pippin and all of his peers are also finding out what their corner of the sky is and where they fit into this world and so it’s relevant to them at this time in their lives.” 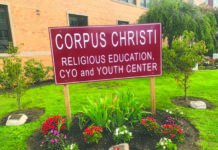