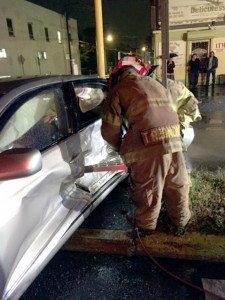 Mineola was alerted for an auto accident with entrapment at Willis Avenue and Linden Road on Thursday Oct. 8 at 12:43 p.m. Upon arrival, First Assistant Chief Brian Santosus confirmed to responding Mineola units that he had two vehicles involved with trapped drivers. Second Assistant Chief Robert Connolly arrived on scene and entered one vehicle to stabilize the driver and prepare the victim for extrication. 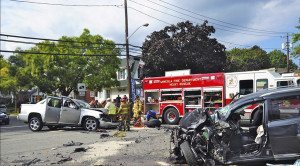 The extensive operation involved using tools from both the fire department and Nassau County Police Department to free the driver. The coordinated operation resulted in an effective extrication in minimal time.

Meanwhile, firefighter Jack Wolf was working to extricate the second driver. Firefighters Rick Ueland, Mark Danielson and Jon Michael Schiavone assisted in this rescue under the direction of Truck Two Captain Andrew Martone. Ex-Captain Nicholas Martone, driver of Heavy Rescue 1610, insured that the firefighters had all of the resources they needed to complete the rescues.

The tools were not back on the truck more than a day before the next call to duty went out on Friday, Oct. 9.

A thunderstorm was battering Mineola. The call went out for a car accident at Willis Avenue and Second Street at 7:17 p.m. Connolly arrived on scene to find an elderly woman pinned in the driver’s seat. Heavy Rescue 1610 arrived on scene and went right to work. Firefighter Thomas Redmond had the “Jaws of Life” and began making the opening to remove the patient. He was assisted by Ex-Captains Mark Danielson, Chris Franz and Paulo Martins, firefighter Tom Capruso, John Englis, Steve Hopkins, Jack and Madison Wolf. Second Lieutenant Spencer Wolf coordinated the operation until the arrival of First Lieutenant Bryan Strauss who ultimately led Truck Two.