Two students from The Wheatley School earned first place in their respective categories at the annual French Poetry Contest held at The Portledge School on April 23. Senior Bonnie Lerman, a poetry contest participant since the eighth grade, earned top honors in Level IV for her recitation of “Quand tu dors” by Jacques Prévert.

Zachary Schloss, a first-time participant in the eighth grade also earned first place among all eighth-graders in Nassau County. Schloss chose “Soleils couchants” by Paul Verlaine as his poem.

More than 150 students from Nassau County public and private schools participated in this year’s competition, sponsored by the Nassau County Chapter of the American Association of Teachers of French. Students’ recitations were evaluated on interpretation, pronunciation, intonation, memorization and poise.

“I am very proud of Bonnie and Zach”, stated Jean-François Henley, French teacher at The Wheatley School. “To have both a senior and an eighth grader win first prize reflects the wonderful range of talent possessed by French students in the district.

Joan Anderson, chairperson of the world language department in the East Williston School District, added, “We are all so proud that our students have met with such success in interscholastic academic competitions year after year. As teachers, we know how strong our students are in our class settings, but it is so important for them, as students, to meet and compete with peers studying French in other schools.” 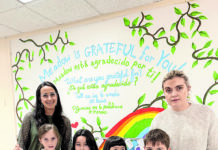