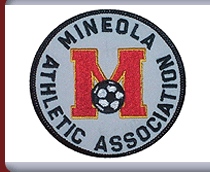 Mineola Rampages Past Mastic
The creative play of Juliannna De Bellis led the GU10 Mineola Rampage to a terrific 3-0 win over the Mastic Enforcers under a beautiful spring sun at Wilson Park on April 25. De Bellis led Mineola’s attack while her defensive teammates were shutting down Mastic’s offense throughout the game. Nicole Pastoressa led the Rampage back line with help from Ashley Ferreira, Hanna Simoes and Caitlin O’Keefe. Mineola put consistent pressure on Mastic, keeping the ball in the offensive end of the field for much of the game. With the victory Mineola evened their record at 1-1 on the season.

Winter Leads FC Mineola
The BU11 FC Mineola squad won their first league game of the season in a well-played 3-2 match against Valley Stream on April 25. Early in the match, Mineola was awarded a penalty kick after a hand ball in the box.
The Valley Stream keeper made a terrific save off Mineola’s Liam Russelman and the resulting fast break led to a goal for Valley Stream. Minutes later they would double their advantage.

Mineola needed a spark and that spark came from striker Greg Winter. The quick and aggressive Winter entered the game and his ability to pressure the Valley Stream defenders inspired his team.

Winter’s relentless efforts were rewarded with a goal, as he volleyed a loose ball in the penalty area into the net. Mineola continued to press, led by Winter, and within minutes had tied the score as fullback Peter Murphy drove a terrific, low missile of a shot from 20 yards into the corner of the goal.

As the first half was coming to a close, Liam Going turned on a ball at the edge of the Valley Stream box and drove a hard cross towards the opposing keeper. As the goalkeeper reached out his hands to corral the cross, Russelman rushed in and headed the ball off the keeper’s fingertips and into the goal for a 3-2 lead which Mineola would hold after a scoreless second half.

Murphy and Brian Heckelman provide solid defensive work in front of Andrew Pizzardi who made several good saves in the second half to secure the victory.

Another challenge followed FC Mineola as they played East Meadow in their second game. Jonathan Damalian and Aidan Levin scored pivotal goals to earn another victory for Mineola, which improved to 4-2 in all competition.

Mini-Mustangs Win Two
The GU16 Mineola Mini-Mustangs continued their strong start to the season with two weekend victories, advancing to the quarterfinal round of the Long Island Cup and improving to 2-0 in their Long Island Junior Soccer League division on April 26. In the Cup game, Mineola fell behind a tough Sachem team ten minutes into a scoreless second half. Sachem continued to frustrate Mineola, with their goalkeeper turning aside several shots to keep the 1-0 advantage.

Midway through the second half, Shannon Durham’s hard shot from a tough angle was saved by the Sachem keeper but the rebound landed in front of Nicole Hetzel, who drilled the ball into the back of the Sachem net to level the score. Durham and Brianna O’Brien would narrowly miss putting Mineola ahead as the game wore on but Sachem’s defense continued to hold off the Mineola attack.

With a minute to play in regulation, O’Brien delivered a low cross from just outside the box where Durham skillfully redirected the ball behind the Sachem keeper for a dramatic victory.

Mineola played its second game against a talented Northport Torpedoes team. After several early chances by Northport went awry, Mineola’s Gretchen Keller pounced on a ball outside the Northport box and, with the Torpedoes goalkeeper out of position, chipped the ball toward the Northport goal.

Teammate Allison Lamonica deftly headed the ball backwards for the game’s first goal. Minutes into the second half, Lamonica was awarded a penalty kick which she smartly converted for a 2-0 lead.

Mineola improved to 2-0 on the season and 4-0 in all games this spring.