Synthetic turf fields have been popping up across Nassau County, with the promise of longer playing time, decreased injury and fair competition. But the field’s underbelly, specifically its infill made of recycled tires, has local advocates paused asking for additional studies.

Most studies are dated, with the latest chronicle being in 2009 by the EPA. The recycled tires made of the infill pose no threat, the study says, but the EPA admitted that “it is not possible to reach any more comprehensive conclusions without the consideration of additional data.”

Other studies suggest compounds like arsenic, benzene, lead, mercury and trichloroethylene among others, are a serious cause of concern.

“It depends on what study you read and who authorizes it,” Mineola School District Superintendent Michael Nagler said of the published reports. “We’re not going to invest in something that has even a slight chance to harm our kids.”

The Mineola School District is currently vetting turf field options, with the most recent $3 million plan calling for a synthetic surface at Hampton Stadium behind the Hampton Street School. According to school officials, Michael Mark of Mark Design Studios is drawing up plans to examine a turf field option at Mineola High School, including a new running track. The track alone would cost $325,000.

For more on the turf field debate, click here.

“We have new direction for the architect,” Nagler said. “At my request, I asked him to look at [the high school].”
The crumb rubber infill has community members and members of the school board concerned. Nagler stated the administration is considering all infill options, rubber or otherwise.

“The compromise seems to be the coated crumb rubber that Bethpage just installed,” Nagler said. “The architect speaks about cooling, which the coated material does.” 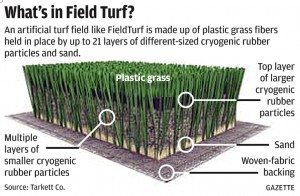 “I’ve read some of the allegations of health issues,” Mayor Scott Strauss said. “Some of them are dated. Before the village does anything, we’re going to look what our choices are with [infill]. It’s a concern of ours. We want to make the fields as useful as possible and without any fear or concern from anyone using them.”

The study has since been put on hold due to the cold snap and unpredictable weather patterns. Before the park was built, it served as a sewer lift station and was overhauled into green space for Mineola.

“We can’t do anything right now because of the snow,” Village Public Works Superintendent Tom Rini said. “Even when the snow melts, it’s going to be swampy. We’ll have to wait.”