Almost 1,500 apartments or dwellings could hit Mineola in the next few years, according to a report obtained by the Mineola American. There are 590 apartments currently rising between the 275-unit Mineola Modera complex and 315-unit One Third Avenue development.

“I haven’t read the study in its entirety yet,” Mayor Scott Strauss said. “We’ll review it thoroughly.”

“I understand Old Country Road development,” Scott Fairgrieve, a former Mineola deputy mayor, said recently. “But now, we’re going above the train tracks. It’s creeping up. If [the village board allows the Village Green], you’re going to set precedents for other buildings in the future.”

With the Village Green development (a fourth public hearing is set for March 11), apartment structures could change the face of Mineola’s downtown, both north and south of Station Plaza–the village’s Long Island Rail Road Station. According to the report, living units are planned for Harrison, Fifth and Eighth avenues as well as Willis and Searing avenues.

“As part of our analysis, we undertook field inspections of the study area, including existing projects and the sites of proposed developments,” the Grygiel firm says in the report. “[We conducted] a general survey of existing land uses, review of materials submitted by applicants for multifamily residential development projects.”

Mill Creek Residential Trust (MCRT), the developer of Mineola Modera and the recently finished senior-housing complex, Hudson House, is said to be eyeing vacant property owned by Corpus Christi Church on Searing Avenue, officials said. A 140-unit structure near the church land is also planned, according to village officials.

“[Mill Creek] builds apartments,” Strauss said. “We’ll see what they come to us with. Right now, it’s off the tax rolls because it’s a church. It’ll come on the tax rolls.”

MCRT is possibly seeking two, single-family homes on Harrison Avenue, adjacent to the Oyster Bay line of the LIRR for a 21-unit building, according to officials. Mill Creek declined to comment.

“In the preliminary stages, with the possibility of them buying the [Corpus Christi] property, [Mill Creek] asked what would be suitable to the village there,” Strauss said. “What they are actually going to come to us with, I don’t know. They were in the process of purchasing a couple of properties; two houses, up against the train tracks at the time.”

Corpus Christi Monsignor Robert Batule coordinated the sale of the vacant church building. He deferred comment until after consulting with church attorneys.

“We are under contract with a reputable developer,” said Bill Garry of Harris, Beach PLLC., who represents the church. “We cannot disclose the potential developer at this time.”

“They sold off the easternmost building near the tracks, not near the church,” Strauss said. “Part of the deal was the parking lot. Not sure if it was successful or not.”

Another project, dubbed The Bridge, (150 units, including a hotel component), would stand at Station Plaza South near LaunchPad Long Island, a co-working think tank. Second and Main streets would see the rise of a 30-unit building, according to the report.

Possible joint ventures with Winthrop-University Hospital could see 150 units and a parking lot on Fifth and Eight avenues, with the structure serving as an office/housing complex.

School Impact
The report suggests 299 public school children are projected to occupy the proposed complexes if built, which equates to 23 students per class. Students and tax breaks for developments sparked heated discourse between the village and Mineola School Board before, during and after recent Village Green hearings. The Mineola School District currently operates at a 22 student-per-class cap.

“That’s a pretty broad guess,” School Board President Artie Barnett said of report. “But at one point, the study states it could equate to 23 kids per grade. Twenty-three kids is an entire new class, new teacher, an entire new section. That’s 13 classrooms.”

“[The village board] seems to be trying to convince people that there’s no kids coming out of these buildings,” Barnett said. “Common sense tells you that a young family that has kids in schools are in apartments until they can buy a house.”

Barnett argues families with young children could change the reported number of school-aged kids estimated to come from the rising and proposed housing complexes.

“People are not going to have juniors and seniors living there,” Barnett said. The lower [school] grades are certainly going to have a high number.” 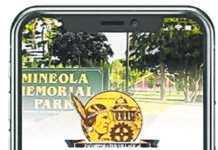