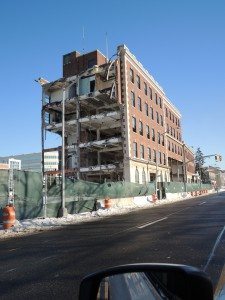 The demolition of the old KeySpan building located at 250 Old Country Road in Mineola is currently ongoing. The complete tear-down is expected to conclude some time in February. Lake Success-based Lalezarian Developers will construct a nine-story, 315-unit apartment complex at the site.

Parts of the structure were pulled down earlier this month. The final demolition days are at 4 a.m. on Thursday, Feb. 6, Tuesday, Feb. 11 and Friday, Feb. 14., but are subject to change. No explosives are being used during tear-downs, according to Mineola village officials.

Weather initially delayed the start of the demolition, Mayor Scott Strauss said. Lalezarian had to postpone the first few “pull-downs” of the structure.

“It’s going the way it’s supposed to go,” Strauss said in a phone interview. “They have the rest of the building scheduled to go and it’s moving along as it should.”

Developers resubmitted plans to Mineola twice since taking over the property. Kevin Lalezarian estimated the total demolition would be 85 percent complete by this week.

“This starts with having good planning, a project that makes sense and contributes to the community,” Lalezarian said. “Hopefully over the next two years, you’ll see a lot happening over there.”

According to Lalezarian, once the building is gone, construction crews would begin to build an on-site parking garage, with preliminary plans to take shape within the next two weeks.

“We will begin excavating as soon as possible,” he said.

The plan presented in May 2012 listed the building’s capacity at 345 units. This latest version pared the project down to 315, which was approved by Mineola in January 2013.

“It’s good to see the work starting,” Strauss said. “For years and years there have been talk and conversation. We finally see shovels in the ground. The residents are finally seeing the plan come together.

Along Old Country Road, the building height would be 84-feet-9 inches tall, while on Third Street the building would reach 94-feet-2 inches in height.

“It’s going to be a great addition to Mineola,” said Strauss. “It falls in line with the downtown revitalization plan and it gets an influx of new residents into the neighborhood and with new residents, it hopefully comes with new businesses.”

The site spans from 242 to 250 Old Country Road and sits west of Franklin Avenue. The building was originally owned by LILCO before being transferred to KeySpan.

The Metropolitan Transportation Authority bought the property in 2005 in order to obtain the property where its intermodal center currently stands. Lalezarian purchased the property from the MTA eight years later.

“This [site] is in a low-impact area,” Strauss said. “We’re not building an apartment building on Jericho Turnpike in somebody’s backyard.”